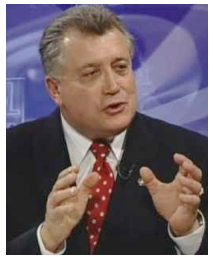 LA NC COALITION-Come meet City Attorney Carmen Trutanich this Saturday, December 1, in Hollywood. Everyone is invited.
Not very many people are familiar with what the LA City Attorney does, but it's a lot, and it's important. The City Attorney's office is involved in crime suppression right at the arraignment stage, and it is involved in essentially every agency of government from the City Council to the Neighborhood Council.

This year, incumbent City Attorney Carmen Trutanich is involved in a bruising reelection fight with Assemblyman Mike Feuer, who previously served on the LA City Council.
Trutanich will be a guest of the Los Angeles Neighborhood Council Coalition (LANCC) and will speak about his plans if reelected and the relationship between the City Attorney and our neighborhood councils. He will then take questions from the audience.
Trutanich made himself into a controversial figure from the very start of his term of office, when he talked about tossing members of the City Council in jail. The City Council retaliated by cutting his funding substantially. The losers were, of course, the public, as essential public services got short shrift as a result of reductions in staffing.  It seems that every year since then, there is another threat to cut the budget of the City Attorney's office.
This got to be so bad that the neighborhood council budget advocates (NCBA) protested, thereby helping to salvage something from the ruins.
For neighborhood council leaders, the office of the City Attorney is also important, as much of what we do is subject to the approval or veto of some deputy in the City Attorney's office. Questions regarding funding, outreach, and even the founding of citywide coalitions have been subject to City Attorney rulings.
The election of the next City Attorney will also be intertwined with the city's budget crisis, since the City Council will be attempting to create some stopgap measure to deal with the growing pension burden, and whether we like it or not, anything we do has to be legal.
Join us at 10 AM on Saturday, December 1, 2012 at the Hollywood Constituent Center, 6501 Fountain. Directions: From the corner of Sunset and Vine, go south (downhill) on Vine for a few blocks to Fountain. Go right 2 blocks on fountain to the center. There is some street parking and some parking in the back.
Riordan's Retreat
We were all set to host former mayor Dick Riordan at the same event on Saturday. Riordan's organization already had people gathering signatures for a radical restructuring of the city employee pension system. Suddenly, on Monday morning, November 26, Riordan announced that he was cancelling the whole thing and calling off the petition campaign. Within another hour, we got word that Riordan's appearance at Lancc was also cancelled.
In regard to the pension initiative, Riordan's representatives suggest that they are merely moving back the timetable for a later go at the ballot.
In the meanwhile, they seem to have misjudged pretty much everything, in that they needed to gather about 300,000 signatures, and they had a late December deadline to get a measure on the next city ballot. In response, city employee unions did a little engaging of their own, as described in numerous articles in the press and the local internet sites, as reported by KPCC reporter Frank Stoltz and by the Los Angeles Times.
There is one issue that Riordan and lots of other ballot initiative campaigns seem not to understand. Let's offer them this bit of advice for free:
When you develop your initiative behind closed doors, it is very hard to get buy in from the public. Here's a better way: Develop your initiative as an open, collaborative process which involves public participation. Hold hundreds of public meetings around the state (or dozens within the city of Los Angeles) in which public input into the text of the initiative is invited. When you have developed a wide constituency for your initiative, then and only then is the time to put it in final form, get the signatures, and run a ballot campaign.
We already have a model for this in the way that city agencies shop their intentions to neighborhood councils and the public.
The advantages to this approach are obvious -- obvious, that is, if you are interested in doing something that will benefit the public. If you are trying to do one of those sneaky initiatives that has secret pay-backs for your wealthy backers, that is another story. Such initiatives haven't done all that well when it comes to election day.
I think that the Riordan campaign ran into this problem when they tried to shop their current petition.
They were met by their opponents in the shopping centers and parking lots where they were trying to sell their product, and they apparently had a bad time of it.
● LANCC Meeting Info: Saturday, December 1, 2012 at 10 a.m. at the Hollywood Constituent Center, 6501 Fountain. Directions above. Program and info re LANCC at lanccoalition.org.
(Bob Gelfand is 2012 chair of the Los Angeles Neighborhood Council Coalition. He can be reached at amrep535@sbcglobal.net)
-cw
CityWatch
Vol 10 Issue 95
Pub: Nov 27, 2012