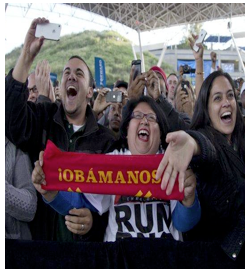 POLITICS - Clearly, we Latinos love President Barack Obama. He garnered nearly three-fourths of our vote. In battleground states like Nevada, Florida, and Colorado , we helped catapult the incumbent president to victory.
Unlike African Americans, Latinos didn't always back Democrats by this kind of margin. In 2004, George W. Bush garnered 40 percent of the Latino vote. Had Mitt Romney pulled that off this year, he might have won the White House.

Although Obama overwhelmingly won our support, we're still unhappy with his immigration track record. He's made no progress toward achieving a long-overdue and comprehensive immigration reform. Even more disheartening, more people are being deported under his leadership than during Bush's presidency. To put this in its tragic context, thousands of our families have been torn apart. Too many kids are growing up without their parents.
Obama lucked out because the Republican Party is taking such an extreme stance on immigration that many Latino voters that might have otherwise voted GOP rejected it at the ballot box.
Romney advocated for "self-deportation" and failed to distance himself from Arizona's Republican-led state government, which passed an extremist "papers please" law that implicitly advocated racial discrimination. Most Republicans oppose the DREAM Act, a bill that would give millions of young undocumented immigrants a path to citizenship. Republicans regularly refer to undocumented immigrants as "illegal aliens," insinuating that they're not only different but somehow sub-human.
We aren't single-issue voters or a homogenous voting bloc. But we do take the issue of immigration personally. Nearly all Latino voters have ties of some sort to undocumented immigrants. We may have been undocumented at one point or have family and friends who are currently undocumented or used to be. Both my parents came to this country without legal documentation.
Ironically, they became citizens because of the 1986 amnesty law President Ronald Reagan signed. Some of my best friends are undocumented. Most of them came to this country when they were kids. This is the only country they've ever known. This is their home — they're as American as me. The DREAM Act would provide my friends and others like them with the opportunity to realize their true potential as American citizens.
When Republicans label all undocumented immigrants as "criminals," "aliens," and "illegals," we in the Latino community can't help but feel that the GOP is badmouthing our grandparents, our mothers and fathers, our neighbors, and our friends. Why would any group support a political party that explicitly disrespects its loved ones?
On Election Day, we came out in record numbers in support of Obama. In tight Senate races in states like New Mexico and Virginia, the Latino vote gave those Democratic candidates a winning edge Without Latino support, the Democratic Party would have lost its Senate majority in 2010 and failed to win it back this year.
The onus is now on the White House to prove that he deserved our votes.
In his most recent press conference, Obama said he supports "a pathway for legal status" instead of citizenship. This is discouraging news. We voted for him because we want our loved ones to become citizens. We won't settle for less. Obama must push for bills like the DREAM Act, and fight for comprehensive immigration reform, but more importantly he must ensure that these are legitimate pathways to citizenship.
We may love President Obama, but now it's time for the entire Democratic Party to prove it loves us back. How long can this one-sided love affair last?
(Javier Rojo is the New Mexico Fellow at Institute for Policy Studies.  This article was provided CityWatch by OtherWords.org)
-cw
CityWatch
Vol 10 Issue 94
Pub: Nov 23, 2012