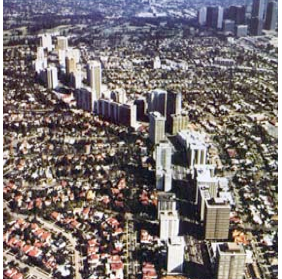 WILSHIRE CORRIDOR, HOLLYWOOD UPDATE - The Update of the Hollywood Community Plan has been challenged by three lawsuits.  As this litigation slowly works its way through the court system, the debate about increasing planned and zoned density has not quieted down.  Let us therefore revisit that debate as it applies to two Los Angeles neighborhoods with mass transit, Hollywood and the Wilshire Boulevard Corridor.

Density, in the form of larger buildings and more people, is welcome in Hollywood, Wilshire Boulevard, and elsewhere, but only when it is properly planned.  In fact, when it is done right -- instead of being added on the cheap as an after thought to spark real estate speculation – increased density can be extremely beneficial for health, social, and environmental reasons.
Hollywood:  In the case of the Hollywood Community Plan Update, however, there is only one approach to increased density: up-planning and up-zoning.  Not a nickel is allocated to prepare Specific Plans for the neighborhoods surrounding existing subway stations where the density would be located.  Likewise, these areas do not have funded programs for tree planting, public landscaping, parks, parklets, playgrounds, schools, fire stations, police stations, bike paths, street lighting, ADA curb cuts, street furniture, and median strips.
These and many other local amenities, public infrastructure, and public services are essential when a proposed plan increases density in the name of promoting transit use.  Without those missing pieces, a density plan, such as the Hollywood Update, is just a short-term gift to real estate developers and a long-term formula for planned failure and neighborhood blight.
Furthermore, the proposed Hollywood Plan does not have a rigorous annual monitoring program capable of tracking the gradual implementation of the Update.  Likewise, there is no mechanism to accurately detect changes in population, housing, and employment; local user demand for infrastructure and services; and changes in the quality of services and infrastructures resulting from either the Update or from unexpected factors.
Finally, the updated Hollywood Plan does not calculate the population increases actually resulting from its own density program, nor how these increases in population and building density translate into increased demand for public services and infrastructure, as well as the amenities required to make Transit Oriented Districts near subway stations a success.
Wilshire Boulevard Corridor:  Furthermore, these obvious lessons appear to have been forgotten in other areas where mass transit is or will be used as a justification for increasing residential densities.  A perfect example is the neighborhoods on the Subway to the Sea, the initial extension of the Wilshire Red Line Subway from Western to LaCienega.
In the previous subway alignment planning efforts for this section of the Wilshire corridor, in the 1980’s, the Department of City Planning prepared detailed Specific Plans and Draft Environmental Impact Reports (DEIR) for the Wilshire/LaBrea, Wilshire/Fairfax, and Wilshire/LaCienega station areas.   These Specific Plans and their DEIR’s extended out in a quarter of a mile radius from the actual station sites and addressed all features in adjoining private and public areas.
Unlike Hollywood, this is the precedent for how Transit Oriented Districts should be developed in conjunction with mass transit, and it was figured out 25 years ago, when the RTD/MTA hired the Department of City Planning to conduct the workshops and hearings, as well as prepare and adopt the Specific Plans.
These Specific Plans proceeded as far as the City Planning Commission, but were forgotten once the subway alignment changed to Vermont, and the Wilshire segment terminated at Western Avenue.   Nevertheless, all of this work is filed away and could be pulled out of file cabinets, scanned, and become working documents applicable for proper transit-oriented stationary planning on the Subway to the Sea.
The lesson from Hollywood and the Wilshire Corridor is obvious.  We know how to properly plan for increased density on mass transit corridors.  If done correctly, as could have happened on Wilshire Corridor, it could succeed.  But, if the station area planning and related programs are ignored, as happened in Hollywood, and is likely to happen on the Subway to the Sea, increased density will be a curse, not a blessing.

(Dick Platkin is a city planning consultant who teaches sustainable city planning at USC’s Price School of Social Policy.  He is a CityWatch contributor and can be reached at [email protected]. Full disclosure: Mr. Platkin is associated with La Mirada, one of the parties participating in the lawsuit.)-cw