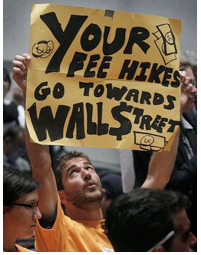 VOTERS BLINDSIDED - Millions of dollars in new tax revenue earmarked for the University of California system as part of the state’s recently passed Proposition 30 will instead be routed to major financial firms, because of bad bets made by a Wall Street-influenced UC Board of Regents.
Over the last decade, tuition and fees for undergraduates in the UC system have tripled, adding enormous debt burdens to UC graduates and pushing lower-income students into the already overburdened state college and community college systems, or out of higher education altogether. Members of the UC Board of Regents, which governs the system and which approved the tuition hikes, have blamed the increases on the bad economy and on politicians.

However, according to a new report written by five doctoral students at UC Berkeley, in the years preceding the 2008 financial collapse, members of the Board of Regents themselves had overseen “a qualitative shift in the financial practices of the University of California” by employing the same kinds of exotic financial instruments that precipitated the meltdown on Wall Street — primarily, bond issuances hedged by interest rate swaps.
An interest rate swap is essentially a bet that interest rates will rise. UC would issue a bond with a variable interest rate, then make regular payments to a third party (typically an investment bank) based on an agreed-upon fixed interest rate. The bank would then pay back to UC a dividend based on the variable interest rate of the original bond, if the variable rate were higher than the fixed rate. If the variable rate were lower than the fixed rate, then the money would go the other way: UC would owe money to the investment bank.
Between 2003 and 2007, the report explains, UC acquired interest rate swaps with five investment banks in order to issue over $600 million in bonds to finance development of medical centers on three campuses. Medical schools and hospitals are major profit centers for universities. As UC used debt financing to expand these profit engines, tuitions for students continued to rise.
Since the risky contracts the Board of Regents entered into were made possible by the collateral afforded by UC student tuition costs and by the Board’s ability to jack up tuition and fees at its discretion, the same students whose ballooning debts and tuition payments to the university were making the UC system’s exotic financial bets possible were receiving no tuition relief from the university out of the profits generated by those bets.
The result of these complicated arrangements has become a familiar story since the 2008 meltdown. The Board of Regents’ pursuit of cheap money to increase UC profits left it exposed to the financial collapse. According to the report, UC’s risky bets have now cost it $57 million, which could rise to over $250 million over the next three decades. Between May 2007 and the end of last year, the Regents doubled UC’s debt load. The UC system is currently paying about three quarters of a million dollars per month to Wall Street firms as a result of the swaps.
Moreover, the LIBOR scandal earlier this year demonstrated that Wall Street bets against rising interest rates were in fact fixed by the banks. All of the interest rate swaps described in the report were based on variable rates determined by LIBOR. Through market manipulation by the banks, UC’s bets were guaranteed to be a raw deal for students, their families, taxpayers, faculty, university workers and anyone else associated with the university.
Like many other ripped-off institutional counterparties to LIBOR trades, UC has standing to sue the banks. But the Regents have not only failed to do so, they haven’t even tried to renegotiate the terms of their agreements, as other institutions have successfully done. The question is, why?
One possible answer is another sadly familiar story: The UC Board of Regents has become what the report describes as a “revolving door with Wall Street.” An increasing number of posts in top UC management and on the Board of Regents have been filled by former Wall Street bankers, the report explains, including a new CFO position created in 2009 and filled by Peter Taylor, who was the Managing Director of Public Finance for Lehman Brothers before he found himself out of a job following the firm’s spectacular collapse.
Monica Lozano, a UC Regent, also serves on the Board of Bank of America, a position for which she has received approximately $1.5 million. Bank of America stands to make as much as $28 million from an interest rate swap at UC San Francisco, according to the report. B of A is also one of the banks under investigation for LIBOR manipulation.
Proposition 30 was passed last week by California voters in part to stem the tide of perpetual tuition hikes and the rapid decline of public higher education in the state. But because of the Regents’ predilection for gambling with student tuition money, much of that new tax revenue will be routed away from tuition relief and toward the very Wall Street firms that — with the Regents’ help — created the financial crisis that accelerated the higher education crisis in California in the first place.
Since its founding, the UC system has always played a central role, both structural and symbolic, in making the California Dream possible. Over the last decade, it appears that the Regents leveraged that dream to make the UC system a player in Wall Street’s casino economy. As with any casino, the game was fixed. Now the rest of us are being forced to pay for their mistakes.
(Leighton Woodhouse is a partner and co-founder of Dog Park Media and Communications Director of the National Union of Healthcare Workers. His post first appeared on Firedoglake.com)
-cw
CityWatch
Vol 10 Issue 92
Pub: Nov 16, 2012