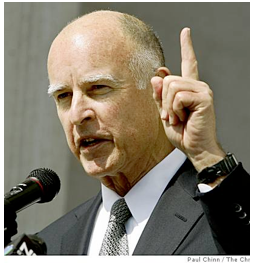 POLITICS - California Governor Jerry Brown deserves our heartfelt appreciation for his hard work for the Yes on Proposition 30 campaign these past few months.

The percentage of Proposition 30's victory mirrored the percentage of the vote Brown won in 2010 when he defeated in the governor's race the former Hewlett Packard CEO Meg Whitman. Working hand-in-hand with California's teachers, nurses, students of all ages, and the state's labor unions, he rallied the troops, and in doing so helped save from fiscal ruin not only the state's public schools but also the nation's biggest and most important system of public higher education. That's what I call leadership. Thank you Governor Brown.
Last August, New Jersey Governor Chris Christie said:
“California made a bad choice with an old retread. I cannot believe that you people elected Jerry Brown over Meg Whitman. I don't want to be insulting . . . Jerry Brown? He won the New Jersey presidential primary over Jimmy Carter when I was 14 years old. And now I got to sit at the National Governors' Association with this guy and have him come up to me and say, 'Stop telling people that I want to raise taxes. I'm going to put it on the ballot and let the people decide.' Yeah, that's leadership, isn't it?”
Setting aside for a moment Christie's arrogance and ageism, for the record: In 2010 Meg Whitman spent about $160 million of her own cash running against Brown and lost for the same reasons the big spending Republican candidates lost in 2012: The GOP is bereft of useful ideas that might contribute to governance.
(Christie's charge against Brown was Orwellian like when Karl Rove accused the Obama campaign of "suppressing the vote.")
But Christie wasn't done yet, he went on to attack viciously Governor Brown as an "old retread" who was a "master" of "huge spending and huge government." Although I will not question Christie's expertise on all things "huge," his blistering assault on Brown only revealed how mean spirited and arrogant he was before his apparent epiphany about the role of government that Hurricane Sandy hammered into his thick New Joisey skull.
Here's why Californians have rejected the Republican Party in their state:
1). Despite the fact that Governor Brown sought to move heaven and earth" to get a balanced budget deal past the stranglehold that the Republican minority had in the State Legislature, the Republican Senators and Assembly members showed a party discipline that Josef Stalin would admire and rejected every one of Brown's generous offers for compromise;
2). Despite the fact that the state of California was experiencing its worst economic crisis since Steinbeck wrote the Grapes of Wrath, Golden State Republicans refused to get off their duffs and offer any constructive suggestions about how to deal with it. They stood by their narrow and extremist anti-tax zealotry even in a time period that called for leadership and pragmatism;
3). Worse still, the Republicans sought to use the fiscal crisis California faced to ram through their political wet dream of crushing labor unions and destroying the state's leading role in protecting the environment;
4). Finally, in 2012 California voters rejected the Republicans' recalcitrance and extremism and voted overwhelmingly to pass Proposition 30, defeat the GOP's anti-union Proposition 32, and elect -- finally, at long last -- the first supermajority in both chambers of the State Legislature since the 1880s.
The bankruptcy of the California Republican Party's ideas, along with its opportunism in seeking political and financial gain from the worst economic collapse the state has experienced in 75 years, led voters to the only logical conclusion: California Republicans are as crazy as anything we see coming out of Mississippi or Alabama and must be sidelined if the state and the nation are going to move into the 21st Century.
Governor Jerry Brown might be a septuagenarian, but his vision and forward thinking are decades younger in spirit and idealism than anything caustic right-wingers like Chris Christie have to offer.
Maybe Governor Christie should focus on cleaning up his own hurricane-ravaged state and get his own house in order before he talks smack about our governor again.
(Joseph Palermo is Associate Professor of History, California State University, Sacramento. Professor Palermo's most recent book is The Eighties (Pearson 2012). He has also written two other books: In His Own Right: The Political Odyssey of Senator Robert F. Kennedy (Columbia, 2001); and Robert F. Kennedy and the Death of American Idealism (Pearson, 2008). This opinion piece was posted first at huffingtonpost.com.  Reach him at: www.twitter.com/JosephPalermo1
-cw
CityWatch
Vol 10 Issue 92
Pub: Nov 16, 2012