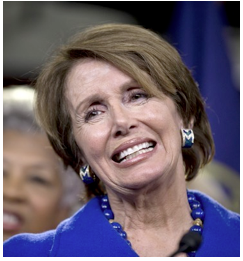 GUEST WORDS - In the history of the Congress, there have been few leaders like Nancy Pelosi. Besides the obvious, her history-making role as the first female Speaker, she has been a powerhouse in many other ways.

She leads a caucus with a wide range of opinions, yet she emerged from one of the most progressive districts in the country. Through sheer strength of will she was able to be the guiding force to pass health care reform.
And yet here we are, democrats are wondering if she'll step aside because she wasn't able to retake the gavel. The answer? A firm NO:
"Being active in politics at this level is really insatiable," Pelosi, 72, said, recounting a conversation she had with her brother explaining why she wants to stay on. "What I said to him was, 'There's not enough hours in the day for me. There's so much more I want to do.' "
"The message is clear from the American people. They want us to work together to get things done.
And that's what these folks are here to do. Just like all of you," Pelosi said during the caucus meeting, according to the notes taken a Democrat in the room. "We may not have the gavel, but as I can see in this room, we have the unity." (WaPo)
Perhaps she is a lightning rod for the Right, but she is also a prodigious fundraiser and an absolutely dedicated campaigner. She faced enormous headwinds in 2010, and this year she dealt with Republican gerrymandering of districts.
Seeing the positive results in California, it is certainly time to start exporting our system of reapportionment to other states. But Pelosi still has a lot of work to do, and is still more than capable of doing it.
(Brian Leubitz is the editor of Calitics.com where this piece was first posted.) –cw
CityWatch
Vol 10 Issue 92
Pub: Nov 16, 2012