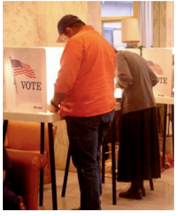 BONC REPORT - So, there we were on election night (remember I said we had a meeting on November 6th) listening to Grayce Liu give her report on DONE and the elections, giving out a 10 year anniversary certificate and discussing, among other things, the factual basis stakeholder issue.  And yes, sneaking peaks at CNN on our Blackberry’s and i-phones.

The Commission met at the new LAPD Headquarters building in downtown LA.  Even though it was election night we had both city staff and stakeholders there to talk to us about matters on our agenda.
From Grayce Liu we learned that the Department was looking at the possibility of cutting another 10% (a loss of 3 to 4 positions) from next years budget.  A loss that would be intolerable in light of the disproportionate cuts the Department has suffered over the last few years.  She reported that they are moving forward with a program for electronic submission of funding documents and a plan to possibly make more use of the P-card while decreasing the need for demand warrants.
Grayce and Steven Box gave us more information on the election successes that had occurred throughout the city.  City wide the number of candidates to open seats increased by 30% and the number of voters by 20%.  That proves NCs in partnership with the Department is better at running elections than some other city agencies.
We had the pleasure of recognizing Hollywood United Neighborhood Council with a 10 year anniversary certificate.  We hope more NC members come to our meetings when your NC is being honored in one way or another by the Commission.
We had a brief discussion regarding the two city council motions introduced by CM Huizar – factual basis stakeholder and subdivision of existing NCs.  Martin Schlageter, his Policy Director gave us some background on the motions and helped explain why they had been introduced.  Terrance Gomes, the IEA for Eagle Rock, the election that was the impetus of the factual basis motion, spoke about his early conversations with board members regarding a possible change to their bylaws that was never acted upon.  That change would have limited the number of seats available to factual basis stakeholders.
The next Commission meeting will be Monday November 19th 1pm in Room 1050 of City Hall.  The agenda will include a further discussion of what action, if any the Commission should take on CM Huizar’s motions.  One big question is whether to take immediate action or include these subjects in any Plan update the Commission might propose early next year.  We will also be considering how we want to support the Department in its effort to prevent any further cuts to its budget and the NCs yearly allotment.
Once again, we encourage NC members and stakeholders to come to our meetings, We want to hear you comments on issues we are considering and get your thoughts on others we should address.  If you are unable to make the meetings you can still communicate with the Commission members by sending an email to [email protected] or by fax to DONE at 213.978.1751
(Len Shaffer is Vice President of the Board of Neighborhood Commissioners.)
-cw
CityWatch
Vol 10 Issue 92
Pup: Nov 16, 2012