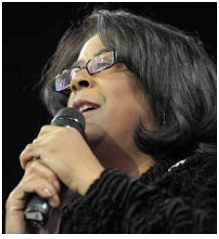 BIZ & POLITICS - In what was billed as her first major campaign address, the councilwoman and mayoral candidate took issue with City Hall's business-as-usual attitude about fiscal policy. Perry says she would press city employees to contribute more to their healthcare and pension costs - something that her council colleagues have been routinely waffling on.

She also wants to make compen sation more equitable for all LA employees. "The truth is that we cannot afford to continue to pay our city workforce in its current configuration." She also took aim at City Hall's "get along go along politics," and the tendency to take "the path of least resistance." From the speech.
“A good example of this kind of leadership was the recent City Council approval of an extension of the business tax holiday for new businesses in the city. It was passed not because it will lead to more jobs or would close our long-term structural deficit. It passed because it is an election year and it's a good policy on which to campaign. We cannot afford that kind of leadership.
“The tax holiday may feel good, but it's not going to accomplish much for Los Angeles. It hurts existing businesses, places them at a competitive disadvantage, adds millions to our long-term structural deficit, and may not add one single new job. I voted against the extension of the tax holiday because it created a false promise - a promise of more jobs and more opportunity for our struggling small business owners.
“I'm running for mayor to end the days of false promises that grab a great headline, but don't deliver.”
(The rest of Lacter’s report)
-cw
CityWatch
Vol 10 Issue 91
Pub: Nov 13, 2012