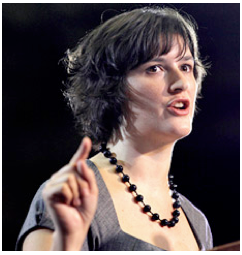 RAGING MODERATE - Holey moley catfish. Well, thank god that’s finally over. Further thanks that the climax was quick and clean. Almost surgical. Not as long a night as many first thought it might be. Except for Karl Rove that is, who for all we know is still scribbling numbers to prove the call on Clinton’s re-election win in 1996 was premature.

And as usual, Florida did all it could to gum things up, but was eventually rendered irrelevant. And long may it remain so.
In the end, President Barack Obama trounced, er, battered, um, eked-out a victory — or to be more precise, Mitt Romney lost. Or shall we say, found a thousand ways to lose. Except for one brief, shining moment in the first debate, virtually carrying with him a defeat diviner.
And each and every one of his failures can be traced directly to females. The distaff of life. Single women. Married women. Old women. Young women. Ladies and divas and flappers and baby mamas; duchesses, priestesses, shorties and floozies.
So here they are, the top ten females who cost Mitt Romney the presidency, each of them representing one of the myriad factors that helped construct the unelectable mosaic that became Bain’s Captain of Industry:
Michele Bachmann. Mitt had to draft on her right wing to win the primary battle, and when he tried to tack back to the center appeared not to be the Washington Outsider he claimed, but a typical politician with the core values of a hollowed-out chocolate Easter Bunny. With really good hair.
Newly elected US Sen Elizabeth Warren from Massachusetts. A state the former governor lost by 23 points. Proof positive the man arouses the enduring passion of a broken garden rake.
Secretary of State Hillary Clinton, who took foreign policy off the table, making the entire election about the economy which kept getting better, gol darn it. And who can forget her husband. He certainly won’t let us.
Sandra Fluke, who gave a face to the GOP’s Paleolithic Bronze Age attitudes towards women, further exacerbated by the fact that no man in the party could seemingly shut up about it.
Michelle Obama, who is just darn likable. As is her husband. A stark contrast to Romney’s cyborg demeanor and obvious discomfort around members of the human species.
Superstorm Sandy, for providing the opportunity for the president to look presidential and for Obama and Chris Christie to French kiss on Atlantic City’s Boardwalk, crystalizing the concept that bipartisanship is not the saddest word. That’s “goodbye.”
Ann Romney, who would have made a simply terrific first lady. For Dwight D. Eisenhower.
Candy Crowley, who single-handedly halted Romney’s momentum in the second debate by speaking way above her pay grade. Don’t you hate it when the help speaks out of turn?
All the Wal-Mart Moms, who never really understood that whole Cayman Islands bank account thing marking him not as the poster child for the 1 percent, but as the poster child for the .0001 percent of the 1 percent.
And the last female responsible for Romney’s loss; Rafalca the 15-year old mare who, while wearing the Romney silks in Olympic Dressage, failed to make the medal round and was probably shipped home strapped to the fuselage of a 747. Seriously, Mitt. Dressage?
(Five-time Emmy nominee Will Durst’s new e-book, “Elect to Laugh!” published by Hyperink, now available at Redroom.com, Amazon or any fine virtual book retailer near you. This column was posted first at Cagle.com)
-cw
CityWatch
Vol 10 Issue 91
Pub: Nov 13, 2012