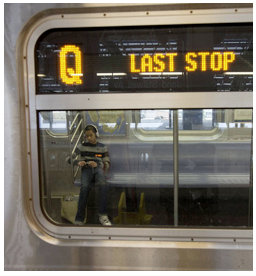 GETTING THERE FROM HERE - Well, County Transportation Measure J did not pass despite receiving roughly 64.6% of the general vote, a higher vote percentage and a clearer majority than the state Proposition 30, which received ten percentage points less than Measure J did.  Without question, the overwhelming majority favored it … but not a supermajority.

So … now what?
1) The question of whether transportation measures have an unrealistically high threshold for passage in this state must be considered.  If only 51% of this state can courageously volunteer a few to disproportionately pay for the rest of us for the obscenely-flawed general budget and education spending in our state, then perhaps a more appropriate voting threshold (60%?  55%?) needs to be considered in Sacramento and in our counties.
2) A more clearly-defined Strategic Plan (unfunded, but long-term goals to be studied and evaluated) needs to be laid out, with both turkeys and winners to be dealt with in an open-mannered fashion before a future “Measure J” is thrown to the voters.  For example, the Pasadena I-210/710 freeway connector and the Eastside Gold Line Extension are turkeys, but future projects, some of which DO need more money ASAP (and more than Measure R can provide in a timely manner) that need more money include:
a) The Foothill Gold Line to Montclair
b) An appropriately funded LAX/MetroRail connection
c) An appropriately-funded Valley/Westside subway connection between the Orange and
Wilshire and Expo Lines
d) Widening and upgrading of the I-710 freeway between the Ports and Downtown
e) Widening and upgrading of the I-5 freeway between the I-605 and I-710 freeways
f)  A higher-speed rail connection between Union Station and Las Vegas, to be coupled with already-existing efforts
g) A Green Line to connect Metrolink and Orange/Riverside Counties in Norwalk
h) Completion of the Alameda Corridor East to ensure a smooth, non-traffic-causing freight rail             flow from the ports to the rest of the nation
In short, we need to show a greater vision for taxpayers, and we need to emphasize that most of these projects can be built only when the existing slew of Measure R projects are funded and on their way to completion.
3) A reconsideration of how the Fasana Amendment, part of Measure J, can allow Measure R funds within a given region to be shifted from a rail to a freeway project, and vice versa, should be enacted either through the legislative process or perhaps through a voter initiative next year.  For example, shifting the Eastside Gold Line Extension funds to a widening of the I-5 between the I-605 and I-710 freeways, and shifting the funds for the underground I-710 extension under Pasadena to the Foothill Gold Line East and Alameda Corridor East projects, are as urgent priorities as ever we’ve had.
4) We need to ask Metro Board Chair and County Supervisor Mike Antonovich to know when to articulate a vision, and to know when to NOT stop alienating the rest of the taxpaying county (and even his own county district constituents).
5) We need to ask County Supervisor Don Knabe, who’s done a great job leading the Metro charge to connect MetroRail to LAX, to work with city, county, state and federal politicians and transportation officials and figure out a way to get that project funded and built by 2020.  Getting that done by 2028, or 2035, is just obscenely-inappropriate a goal to set.
6) We need to ask County Supervisor Mark Ridley-Thomas to reject the extremists who will hold the rest of the county down and tie up worthy projects in the courts, to figure out how to get the Crenshaw Line extended to the future Purple Line in the north, and extended to LAX and the South Bay in the south.  He’s a good man, and a consensus builder, and we need him more than ever to get this wonderful north-south line built to its fullest potential.
7) It’s a moot point as to whether LA World Airports Chief Executive Gina Marie Lindsey needs to get her mouth washed out with soap whenever she talks about relegating the LAX/MetroRail connection to a third-rate Busway—she’s gone when Mayor Villaraigosa leaves.  But absolutely NO City of LA Mayor should be elected in 2013 without a promise to have a solid LAX/Metrorail connection built by 2020.  Are you listening, my mayoral wannabe friends?
(Ken Alpern is a Boardmember-Elect of the Mar Vista Community Council (MVCC), previously co-chaired its Planning and Outreach Committees, and currently is Co-Chair of its MVCC Transportation/Infrastructure Committee. He is co-chair of the CD11 Transportation Advisory Committee and chairs the nonprofit Transit Coalition, and can be reached at Alpern@MarVista.org. He also co-chairs the grassroots Friends of the Green Line at www.fogl.us.   The views expressed in this article are solely those of Mr. Alpern.)
-cw
CityWatch
Vol 10 Issue 90
Pub: Nov 9, 2012