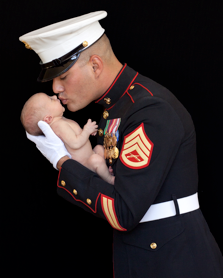 RUSS REPORT - In 1913, Frederick R. Bernard coined the phrase, “A picture is worth a thousands words.” It was, solely, the poignant picture and the emotional responses from many that triggered a story about the Marine holding his infant child. The image is truly worth 1000 words.

Photographer Heather Bird’s digital portrait of a Marine kissing his first-born daughter captured not only an image of a Marine, but that of his character, his will and his resolve, as well.

Bird, who was inspired by a photo of a fireman holding an infant wanted to recreate that image with the young Marine.

That Marine is SSgt. Steven Finn, stationed presently at Fort Huachuca, Arizona. Finn teaches at the Unmanned Aircraft Systems Training Battalion (UASTB), or the “school house,” whose primary mission is to train Soldiers’ and Marines in the operation and maintenance of Unmanned Aerial Vehicles (UAV). UASTB is the largest training center of its kind in the entire world.

Finn enlisted in the Marines in 2003 at age 17 baut needed his mother’s consent. He wanted to go infantry, but ended up compromising with his mother and chose an aviation/ technical path. He had to wait six months before he could enter boot camp because of training school schedules. His first deployment to Iraq was in 2005, where, he says, it was unsettling for him because insurgents had been attacking their base at least twice a week or more when he arrived.

Finn served 4 tours of duty in Iraq and 1 tour of duty in Afghanistan. For each deployment, Finn operated and maintained UAV’s used for surveillance and recognizance of suspicious activity, to protect troops and to assess battle damage, among other things.

Finn met his wife, Charli, in 2006, when he came home on leave to run a marathon. Two years later, in November 2008, they were married. Because of his multiple deployments, starting a family was difficult and it would be four years before the birth of their daughter, Eve.

Over his four deployments to Iraq, Finn remarked that there were positive changes within Iraq. “We were able to push the insurgents out of the Al Anbar Province,” he said. Command at the base was actually getting a lot of ‘Intel’ from the Iraqi people whom, he said, appreciated the American military presence.  Their base had not been attacked at all by insurgents during Finn’s last deployment to Iraq that ended in November 2008. A scant year later, Finn was deployed to Afghanistan for seven months.

Of his return to America, Finn, humbly, said his sleep comes and goes. Sometimes, he wakes up sweaty and his heart is racing and he can’t remember what he was dreaming about. He can’t watch war movies like ‘Act of Valor’ because he was there and participated in many Ramp Ceremonies of fallen service members and the memories of flag draped caskets going home will forever haunt him.
He said, “I have good days and bad days.”

The events of 9/11/2001 are indelible in Finn’s mind because they profoundly impacted him and those events are what propelled his enlistment. He spent his 19th birthday and three subsequent birthdays in Iraq and, recently, has decided to make the Marine Corps a career.

Some of his most ardent support (exclusive of family), according to Finn, came from Ken Martin, Executive Director/Founder of the USA Cheerleaders, who sent his unit dozens of “care packages” that included a blue-ray player and movies. Finn sought Martin out when he needed to talk and on more than one occasion said he was profoundly grateful for everything Martin did for his unit.

Martin, who knew Finn’s wife, Charli, before their marriage, remarked, “The fact that he (Finn) has done five tours to the Middle East to protect our Freedom at such a young age astounds me. Steven embodies the term Marine. The mere fact that if he was called upon this very moment to head back to Afghanistan, he would, without a question, leave his family, his wife and his newborn daughter to protect the Land of the Free.”

Martin’s organization is a Professional team that supports the Military and has over 46,000 fans on Facebook (FB). On the Founding of his organization, Martin said, “This was my way of giving back to those that were serving and in harms way.” He has established a “pen-pal” system as a means to keep morale up for those engaged in battle overseas. The men of Finn’s unit refer to Martin as a hero because to many, he is.

Not all these brave men and women will come home from war with physical injuries but many will come home wiser beyond their years, some, unknowingly, suffering from “invisible injuries” that now, are rampantly swept under the carpet by the Veteran’s Administration (VA).

More than two million men and women were sent to Iraq or Afghanistan. More than 6,000 of them were killed while approximately 44,000 were wounded in action. One in five will return with post-traumatic stress, major depression or traumatic brain injury. More than 1,000 of these soldiers are missing a limb. Our nation owes a debt of gratitude to people like Finn who sacrificed much of their youth to keep America safe.

The majority of people in the Marine Corps, now, have enlisted since Sept. 11, 2001 because of the tragic events of that day.

● Please visit facebook.com/USACHEERLEADERS to “like” this page or pledge your support.

● Bird, the photographer, who teaches photography at the Fort Huachuca Arts and Crafts Center, can be reached at birdfamily4@yahoo.com

(Katharine Russ is an investigative reporter and a CityWatch and North Valley Reporter contributor.)
-cw