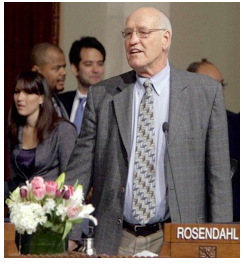 MAILANDER TALKS POLITICS - A cute little cottage for rent on California Ave. in Santa Monica, regularly wrapped in morning mist, tucked between two apartment buildings.  Three bedrooms, two baths, and a cute granny garden in the front.  What could be wrong with this charmer, eight blocks from the beach?

That's just the advertised price--who knows how much it will take to move in?

Santa Monica, surrounded on one side by Pacific blue and on three sides by the gritty taupe of the city of Los Angeles, is getting badly gridlocked--to a point that it's impacting its neighbors.

Despite this, it's permitting new rental units anyway--lots of them.  And Westside rents, not just in SaMo, are careening out of control all throughout Councilmember Bill Rosendahl's Westside district that runs from Playa del Rey to Pacific Palisades.

To cop Yogi Berra's famous line about a beloved restaurant, it's so crowded around Santa Monica that nobody goes there anymore.

Not if they live across town and can help it anyway.

What's built in Santa Monica is of course not Bill Rosendahl's fault.  But what happens in Santa Monica affects Los Angeles, and LA has profound leverage regarding what happens there--a leverage that doesn't always get utilized, and may become less well-managed than ever as Rosendahl is obliged to spend time managing his illness.

Rosendahl began undergoing treatment for a slow-moving cancer, a cancer that began in the ureter, just this summer.  Disclosures about the illness have been few and far between, with the Councilmember offering affirming, ceaselessly encouraging statements at clever intervals and local media generally obliging him with their usual docile politesse.  But there's no question that Rosendahl's work schedule has been impacted; he even reportedly had difficulty walking until only last week.

He recently was obliged to miss six weeks worth of Council meetings while undergoing treatment, and is using medical marijuana to manage his pain.

Rosendahl is 67--retirement age for many--but sounds as though he's ready not only to complete his term but to run for another.

Even while a Councilmember takes time away, potholes can get filled and street lights timed just right.  But the hard business of regional management is another story--and part of the story of  Westside Los Angeles is the hard work of planning for the region as well as the cities independently.

This work is done at the top level--Council deputies don't have enough authority to swap horses with out-of-towners--and is extremely demanding, physically as well as emotionally.

There is even a degree of competitiveness that must be engaged; for instance, Santa Monica's City Councilmember Pam O'Connor is also Chairwoman of Metro.  Her reputation in her own city is as a sub rosa transit hub density hawk, one of those who believes that congestion itself will push people into mass transit.  That dovetails well with Mayor Villaraigosa's hopes for the region, as well as Mayoral candidate Eric Garcetti's, but it's been an unpopular position on LA's Westside.

And it's easy to see why.  I'm guessing that whomever rents the three bedroom charmer on California Ave. for $4,990 a month, isn't going to use O'Connor's public transportation very much, no matter how good it gets.  Nor are those in luxury towers or most of the forty-unit densityplexes on the Westside.

Santa Monica isn't the only Rosendahl-adjacent city that impacts the quality of life in Los Angeles at the regional level.  Culver City's daytime population is increasing all the time.  And one strip of Mar Vista--where Rosendahl lives--recently began making noise about seceding from the City of Los Angeles in the hopes of benefiting from the level of services in Culver City.

Rosendahl has demonstrated that he's at least nominally interested in keeping density in check, maybe even a little more so than his cohorts in Santa Monica.  Earlier this year, he pushed a development in Playa Del Rey into tougher EIR territory than the City Planning Department was on track to do.

The concerns surrounding Rosendahl's health may be overstated.  He appears to be winning his battle--which everyone is hoping for.  But if his time and energy are compromised by his fight, it may be unreasonable to expect him to meet the full demands of regional politics on the Westside at this special time--a time when traffic is gridlocked, rents are climbing, and the interactions between Santa Monica, Culver City and Los Angeles are more intricate than ever.

(Joseph Mailander is a writer, an LA observer and a contributor to CityWatch. He is also the author of New World Triptych and The Plasma of Terror. Mailander blogs at www.josephmailander.com.)
-cw