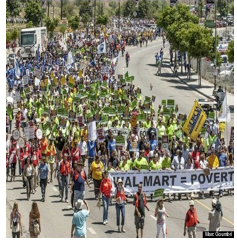 PEOPLE POWER - A loud, organized, colorful crowd met at the LA State Historic Park for a brief rally, and then marched into Chinatown down Broadway to protest a Walmart grocery store planned on Caesar Chavez Avenue.

Many sported labor union t-shirts and signs complained that Walmart's treatment of workers and low wages would disturb the unique charm of Chinatown.

"The cultural and historic nature of this neighborhood must be saved," Congresswoman Judy Chu told the crowd who had marched to the Chinatown Gateway. "When Walmart comes into town it destroys local businesses that cannot compete with its megapower," she added.

Chu then asked the crowd, "What would happen to landmark businesses just down the street here like Phoenix Bakery and Wonder Bakery if you could just go down to Walmart and get a cake for $1.99? What would happen to Columbus Pharmacy, that's just down the street too - and it's been there for decades — if you could go to Walmart and get Brand X aspirin for 50 cents cheaper? The sad truth is Walmart's model is to destroy small businesses, and we can't let that happen."

Musician Ben Harper, who played to the crowd along with Tom Morello, said anything is better than Walmart including driving miles away to the nearest Ralph's.

"LA is losing historic landmarks hand-over-fist. I think Chinatown is one of those: as a culture, as a community, architecturally," Harper said after his speech and performance. "We are already suffering the plight of minimalls, irresponsible, irrational homogenization of culture. It needs to stop. Especially in LA."

"I think [the candidates] should be here, without question," Harper said. "And I think there should be 10 times the amount of people who were here. So that's what we're doing here today. Maybe the next one will be 10 times as big."

Some who were there included several protesters identifying themselves as members of the elusive Internet group Anonymous.

"Some people think we're just a hacker group, we're more than that," explained a young woman wearing a mask. "If there's something that's not right in this world, someone needs to stand up and speak out."

The only person at the march who seemed to support the Neighborhood Store was someone who took the stage claiming to be a family member of the wealthy Walton family.

"Brick Walton" chided the crowd, thanking them for coming to the ribbon-cutting ceremony but before he could go on much further several Teamsters walked over to their Harley-Davidson motorcycles that were lined up next to the stage and revved their engines drowning him out.

(Tony Pierce reports for Public Radio KPCC where this article was first posted. Complete info including scheduling and audio on 89.3 KPCC Radio at scpr.org)
-cw