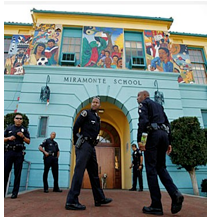 CALWATCHDOG - After passage in the state Senate by a 33-4 bipartisan majority, the Assembly Education Committee bowed this week to the state’s all-too-powerful teachers unions, rejecting a bill authored by Alex Padilla, D-Van Nuys, that would have expedited the dismissal process for teachers accused of sex, violence or drug offenses involving children. (Link)

The measure, SB 1530, cleared the Senate by a 33-4 bipartisan majority (a rarity in Sacramento). However, intense lobbying by the California Teachers Association and United Teachers Los Angeles resulted in Padilla’s bill falling one vote shy of approval by the Assembly Ed Committee, killing the much-needed reform for this year, if not forever.

Padilla crafted his bill in the wake of several scandalous incidents this past school year in which students were sexually abused by teachers. Perhaps the most notorious case involved Mark Berndt, a third-grade teacher at Miramonte Elementary School in Los Angeles, who was accused of 23 lewd acts against children.

After being fired by the Los Angeles Unified School District, Berndt filed an appeal. While it is likely the school district ultimately would have prevailed, it would have done so only after expending considerable time and money. So the school district actually paid the accused child molester $40,000 to drop his appeal.

SB 1350 would have modified the broken-down process for firing teachers, which in one notable LA Unified case took eight years and nearly $2 million before the district was able to rid itself of Matthew Kim, a teacher accused of sexual misconduct.

Among other provisions, the bill would have empowered school districts to make decisions on firing teachers rather than the current process, which leaves that up to a three-member appeals panel (which includes an administrative law judge and representatives chosen by the teacher and the district).

It also would have allowed school districts to place teachers on unpaid suspension if they are suspected of serious misconduct, and would have eliminated the 45-day notice to teachers facing disciplinary action, during which time the teacher my very well remain in the classroom.

The teachers unions vigorously opposed SB 1350, teacher sex-abuse scandals or not, because the legislation “solves nothing, places teachers at unfair risk, and diverts attention from the real accountability issues at LAUSD,” said UTLA President Warren Fletcher, in a statement.

Sen. Padilla disagreed, in a statement of his own yesterday, explaining that the measure does not target any and every teacher facing disciplinary action, but only those suspected of the most “egregious” misconduct. “SB 1530 was narrowly crafted,” he said, “to focus only on cases in which school employees are accused of sex, violence, or drug use with children.”

Assembly Education Committee Chair Julia Brownley sided with Padilla, the only Democrat on her committee to vote for SB 1350. Contrary to Fletcher’s insinuation, she said she was satisfied the measure afforded due process to teachers accused of misconduct.

In fact, not only would teachers accused of misconduct still be able to present their defense to an administrative judge (sans representatives for the teacher and the school district), they also would be allowed to appeal an adverse ruling in Superior Court.

LAUSD Superintendent John Deasy, who faced by one teacher scandal after another this past school year, said SB 1530 is a desperately-needed reform and that Democratic members of the Assembly’s Ed Committee did a disservice to the state’s public school children by failing to pass the measure.

“We’ve made it very clear in California,” he said, “that we care about teachers’ rights and we’ll throw students’ rights under the bus.”


(Joseph Perkins is the Business Editor for San Diego Magazine. He previously authored a nationally-syndicated column for the San Diego Union-Tribune. Before that, he served on the White House Staff of former Vice President Dan Quayle. He writes for CalWatchDog.com where this article was first posted.)
-cw