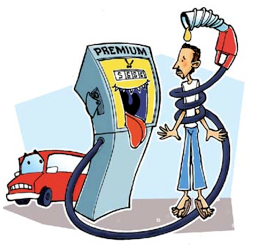 The latest Lundberg report shows that the cost of gasoline continues climbing nationwide and Los Angeles is in the lead. The highest price in the lower 48 U.S. states among the cities surveyed was in Los Angeles, [link] Lundberg said.

“As refineries complete their maintenance, overall motor- gasoline supply will become more generous, and this will probably put a stop to the price rise,” Trilby Lundberg, the president of Lundberg Survey, said yesterday in a telephone interview. “This of course depends on whether crude-oil prices cooperate.”

No wonder Obama is desperate to get out in front of the issue. The dilemma is that he has invested so much of his prestige in his energy policies that he cannot admit those policies have been an abject failure. But he also cannot have people thinking his policies are responsible for the energy price Americans care about most: gasoline.

"Despite the gains we have made, today's high gas prices are a painful reminder that there is much more work to do to free ourselves from our dependence on foreign oil and take control of our energy future," the president declared Monday in a statement on the one-year anniversary of his "Blueprint for a Secure Energy Future."

Let us take the second proposition first. Obama often says, "Under my administration, America is producing more oil today than at any time in the last eight years." That is true: It is also true that under Obama's administration, Snooki from "Jersey Shore" got pregnant and Charlie Sheen lost his job. And he can take about as much credit for those developments too.

Never mind that if he had gotten the cap-and-trade proposals he campaigned on, energy prices would be even worse. (He once acknowledged that under his proposals, electricity prices would "skyrocket" and coal companies would go bankrupt. His Energy secretary, Steven Chu, admitted he wanted America to emulate European gas prices, when they were about $8 per gallon.)

The boom in oil production has taken place almost entirely on private and state lands, while on federal lands it dropped (11% from 2010 to 2011 alone). The administration has also slowed the permitting of offshore oil and gas development to a trickle.

Another major factor is the development of new technologies that make it possible to extract ever-more fuel from domestic sources. Instead of words of support, Obama keeps telling those companies they need to be taxed more and have their subsidies yanked.

Ending subsidies to business entirely, including oil companies, is a good idea. But Obama's policy is completely different. He thinks he is smarter than the market and can pick winning industries and products.

It is an ugly record. Forget Solyndra — and other solar and wind firms that have been going belly up like birds around a windmill — that is old news. So is his decision to block the Keystone XL pipeline.

Few of the issues we face are as crippling here in Los Angeles as the price of gasoline and yet we continue hitting the highs. There is no end in sight on our current path.

(Kay Martin is a writer and a new contributor to CityWatch. His years of travel and work included tours in Russia, Europe, the Middle East, Africa, Asia, Australia, Hawaii, Latin America, and the Pacific.  He can be contacted at [email protected]) –cw