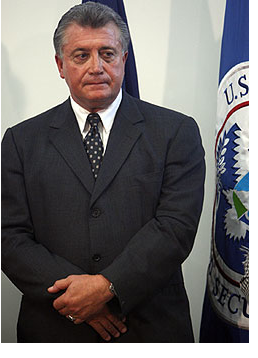 VOICES - Apparently Los Angeles City Attorney Carmen Trutanich…”NUCH” (pronounced Nuke, as in Nuclear Threat) to  friends…feels he has the “divine right of kings” when it comes to the law.


Historically, “das boot” was reserved for “mom and pop” housing providers while home owners and renters…the largest voting blocs...were exempt.  However, I am happy to announce that the joy of das boot- in-the-ass will be shared with the homeowners, too.  How?  Listen up:

Houseguest Squatters’ Rights
I was recently informed by “L.A.’s finest” that if a houseguest stays for 10 consecutive days your guest morphs into a “tenant” replete with all perks of real tenants, i.e. the ones who pay rent.  You can’t just lock the freeloaders out, according to the officer, you must evict them!  That means about 3 months from start to finish while your “guest” lays about the patio sipping Piῆa Coladas.

Upon my request for a code section (my new mantra), the officer hemmed and hawed and finally admitted that it’s not really a law but rather a policy decided by “NUCH”.  Nice to know that now, rather than a nation of “laws”, we are a nation of “policies”.  Hmmmm….equal protection under the policy?  How about, “Perry Mason, attorney-at-policy”?   Or, my favorite T.V. show, “Policy and Order”?

A.C.E. – Administrative Code Enforcement
The “NUCH Squad” got worried about their pension funds, so The Big Guy came up with A.C.E., which by-passes judges and courts and “notice and opportunity to cure”…and dives headlong into our pockets without all the “fuss and muss” of due process.   ACE goons will issue “tickets” for alleged “code violations”…e.g. cracks in the sidewalk…that will now be homeowners’ responsibility…and fine you before you get the chance to fix or fight it.  If this thing passes, I’ve vowed to cordon off the sidewalk in front of my house, thereby forcing passers-by to pass-by in the street.  After all, what if they trip on the sidewalk?  Now I’m liable instead of the city, although sidewalk repair is the city’s responsibility.

Ignoring Court Orders
Some owners have sued the city and won judgments in their favor.  However,  NUCH’s band of merry scheisters…with full approval by their boss…could care less!

Property owners David and Barbara Darwish petitioned the court (L.A. Superior) for a “writ of mandate” to enjoin LAHD and the NUCHsters from  criminally prosecuting the couple because they owned a 3-unit, which the city irrationally insisted was only a 2-unit, and ordered them to “return the place to 2-units”.   According to former Judge David Yaffe, the Housing Department’s job was to ensure habitability…not jail folks because the Department of B.S. lost the permits.  The Housing Department even published a brochure for owners, “Preparing Residential Housing for Habitability Inspections” (“google” it), which lists the code sections for which owners must comply.  Building permits…or lack thereof…were not listed as “habitability” issues.

Never ones to turn down a chance to pick our pockets while dispensing das boot,  LAHD and the NUCHian ambulance-chasers continue to cite and prosecute owners for these bogus “violations” outside the scope of their authority as they  are not habitability issues.

Violation of Due Process
Santa Monica attorney, Thomas Nitti, has represented owners more than once because LAHD sent the Notices to Comply to wrong addresses, after the compliance date, or not at all.

Nevertheless, LAHD continues to violate this most basic due process right…NOTICE AND AN OPPORTUNITY TO BE HEARD….with impunity.  So why should NUCH and company care if the city gets sued over and over again?  It’s not their money slipping down the rabbit hole…it’s YOURS!

Fraud Upon the Court
Attorney Darian Bojeaux, prosecuted by NUCH’s henchwoman, SERENA CHRISTION, finally got a judge, the Hon. Henry Barela, to agree that LAHD and the C.A. Office were charging unconstitutional “costs” to defendants.  Of course Attorney Christion vowed to appeal this decision, apparently hoping to get a crony judge to agree with her.

Angelenos, haven’t you had enough? Are you going to let NUCH continue to “nuke” the Bill of Rights?  He wants to be District Attorney so his tyranny “under color of law” can spread to the entire county.

Please, “JUST SAY, “NO” TO CORRUPT POLITICIANS and other infectious diseases.