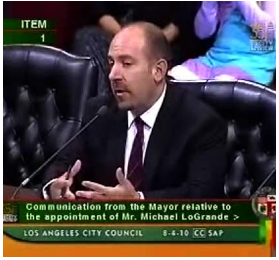 PLANNING CHECK - It was a shotgun wedding, Mayor Villaraigosa stood alongside Michael LoGrande as First Deputy Mayor Austin Beutner officiated, proclaiming “There’s no further need to conduct a search!” and then introducing the happy couple as Mayor and City Planning General Manager.

LoGrande was tapped to replace Gail Goldberg as the head of City Planning, a move that demonstrated the Mayor’s commitment to moving forward on the 12-2 program in an effort to speed up development.

Critics dismissed the action as a misguided “out with the planner, in with the expeditor” move that confirmed suspicions that City Hall belonged to the developers and the community was up for grabs.

Nine months later, the City Planning Department has continued down the path of evisceration at the hands of the Mayor’s Budget Hawks and LoGrande has facilitated the move to cost recovery that has resulted in a department that is 75% funded through fees.

While some may look at this “cost recovery” scheme as fiscally responsible, it translates into an abdication of City Charter mandate and concludes the Planning Department’s transition from “keeper of the vision” to “merchant of exceptions.”

Land use and transportation issues are the stuff of legend, fracturing communities and dominating neighborhood civic engagement to the point of absurdity. Case by case debates over variances and exceptions that drag on and destroy trust in the process leave stakeholders distrustful and disenfranchised.

LoGrande had an opportunity and he took it, demonstrating with results that under the current planning process, good projects are nearly impossible and bad projects are highly profitable.

Some of the most active community planning advocates contend that LoGrande missed the real opportunity, one that would have required him to rally his department and fight for the funding necessary to really plan.

Critics refer to the disconnect between the elements of the General Plan and the Community Plans, the Specific Plans, the Master Plans, and the Vision Plans, all of which leave the battlefield of the community open to developers who can write 39,000 page documents as the bulldozers rev their engines and the public watches the circus come to town.

LoGrande had an opportunity to embrace technology and to actually connect real data with the direction that City Planning is headed but that failed to happen.

As the population declines, City Planning is braced to support further density, complete with antiquated code that results in empty lots on major boulevards, open parking lots that live on as protected use, huge developers that thrive while small developers go bankrupt, and a default attitude that allows the CRA to assume de facto Planning authority.

Yesterday’s Planning Commission hearing included a presentation that revealed 70% of the multi-unit development over the last several years consisted of projects that were 10 units or less. Yet the City of LA continues to punish (with codes of absurdity) small developers in favor of large “luxury living” developers who enjoy tax breaks and subsidies that result in housing in excess of demand for a market that doesn’t exist.

All this takes place while the middle class continues to get priced out of neighborhoods that locals refer to as “under siege” by developers who prey on communities by investing based on current zoning and then develop based on exceptions and variances that destroy the community and make a mockery of City Planning.

LoGrande has had nine months to demonstrate his convictions and his intentions. Based on results it appears that Bigger & Faster is his mantra and it is taking place at the expense of our city.

As Zev Yaroslavsky said at last week’s Citywide Alliance meeting, “This is not only a disaster for the people, the environment, and local neighborhoods, it's also a disaster for the builders. If the Rule of Law is gone, there is no stability and everyone suffers except for those who abuse the system.”

(Stephen Box is a grassroots advocate and writes for CityWatch. He can be reached at:   Stephen@thirdeyecreative.net.)     -cw