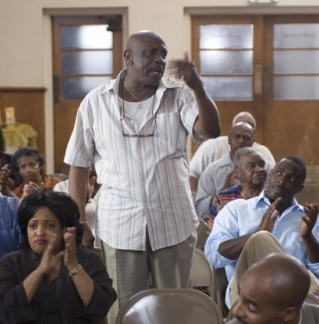 THE VIEW FROM HERE - I find myself having great conversations with people who genuinely want to change their community.

One of my community colleagues took on the task of asking one of his Beverly Hill friends how the neighborhood is able to be crime free and clean at all times.  The response received is that the citizens of Beverly Hills won’t tolerate it; and they will shame their politicians or police for letting anything of the sort happen.

“Shame” and “not tolerate” are the key words that got me to thinking about how this transcends to other communities.

I was watching Daddy’s Little Girls, a film by Tyler Perry.  There is a scene where there is a neighborhood town hall meeting and people are expressing their concerns about the community.  The District Attorney whispers to the Councilman that the community never says anything about crime.

Next, he asks how many have reported anything or is willing to testify against the people wreaking havoc on the neighborhood.  Willie (Louis Gosset), the person who is the owner of mechanic shop, gets up and gives a brief soliloquy about  what the neighborhood was before and  how it has changed.

Interestingly, he points not to the politicians or police to change the neighborhood.  He points to the people at the meeting and says that the people must take back their back community.
Willie resonated with me loud and clear.

People change communities, not the police or the politician.  Neighborhoods that are riveted with crime or tarnished by developments that stunt its growth sit silent too long that its voices becomes obsolete.

The most engaged communities are the ones who step up and demand actions that will change it.
Let’s take Beverly Hills for instance.

For the most part, you can go anywhere in the city of Beverly Hills and find most neighborhoods in pristine condition.  There aren’t liquor stores on every corner or developments that will bring down the value of the quality of life.

Likewise, any disorder will result in some form of complaint to the politician, police, and association of citizens who will not tolerate it.

Culver City went from blight and abandoned buildings to a bustling City economy that improved the lives of their citizens because they were part of the design implementation and highly involved in creating a city that had good developments, good schools, and good living.  The overall result was a creation of an economic hub where neighborhood people buy and sell local.

What makes other communities unique to the point that they face deterioration, crime, undesirable activity, and poor school?

The answer is the people.

The people strengthen their communities by being participatory and engaging.  They identify needs and tackle them.  Some examples of needs are transportation, healthy food options, supporting local businesses, greener environments, education, and crime reduction.

Next, the people do not allow the nonsense that bring down neighborhoods like public intoxication, loitering, drug trafficking, truancy,  proliferation of drug stores and smoke shops, unreported criminal activity, lack of transportation or local buying options.

The people drive changes not the politicians or the police.  If struggling communities really want to go through a metamorphous, they must engage and participate.

(Janet Denise Ganaway-Kelly offers more than a decade of accomplishments in the housing and nonprofit sector. Janet brings valuable insight in the areas of community and economic development. Additionally, she brings knowledge regarding the leadership and management challenges faced by large and small nonprofits that are struggling or growing organizations. She blogs at  jdkellyenterprises.org )       -cw