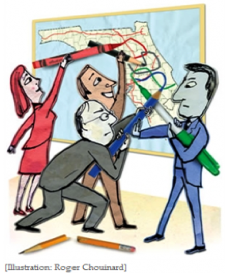 REDISTRICTING - My two-year-old son loves his tricycle. But his legs are too short to reach the pedals. So he propels himself by pushing off the ground with his feet -the same way Barney Rubble drove his prehistoric car in the Flintstones.

This method of propulsion limits my son's tricycle range to two blocks. Which would be enough to take him through three Assembly districts -- if the new redistricting commission maps are adopted.

It turns out my family lives in one of those neighborhoods - we're apartment dwellers in Los Angeles' Miracle Mile -- that would be divided up multiple ways by the new maps.

Here's how life at the seams of three districts would work, if the preliminary maps released last week become finalized.

When I'm in my apartment, I'm in one assembly district. But when my two year old, his younger brother (4 months old), and I (the stroller driver) step onto the sidewalk, we turn left and head south to where our block ends at Olympic Boulevard.

Immediately across Olympic is our local Starbucks, where the boys and I are regulars. As soon as he crosses Olympic and hit Starbucks, we're about 150 yards from home - and in a different assembly district.

On other days, we turn right and head north one block to Hancock Park, where my two-year-old likes to dismount his bike and run around the Alexander Calder-designed fountain that's next to the Los Angeles County Museum of Art. As soon as we cross Wilshire Boulevard to head into the park - about 300 yards from home, since this block is longer - we're in a third assembly district.

We had no idea that these three places - our home, our park, and our coffee house, each a block apart from the other - represented three different communities of interest. We see the same parents and stroller-set kids in all three locations.

So what does this tell us about the maps?

Not much. Strange as this is, there's no reason to use this example to condemn the work of the redistricting commission. It's the nature of the beast. Districts have to end and begin somewhere.

And I'm less than worried about losing influence in Sacramento. All three districts, like 90 percent of the districts in California under the new maps, would be totally uncompetitive.

Whether I'm at the park, at Starbucks or at home, I'm going to be represented by a liberal Democrat, whether I like it or not.

Of course, this doesn't much bother me because that person's discretion on major issues is going to be severely limited by California's governing system and its sea of spending mandates and other budget formulas.

It doesn't matter what I want. I don't have any real say in who represents me in the legislature. These new maps don't change that fact.

The trouble with redistricting isn't the maps. It's the concept and the context. Dividing the state into 80 Assembly districts (and 40 state senate districts and 53 Congressional districts) is guaranteed to produce random districts whose lines don't make a ton of sense.

And the fact that these districts are represented by one member - and the related fact that Californians have sorted themselves into communities of the like-minded - mean that it doesn't much matter where you are in the state.

There's not going to be a real legislative contest there.

There's a straightforward solution to redistricting: Don't bother. The state has clearly delineated regions. The natural boundaries of those districts should be the outlines of big, multi-member districts, with representatives determined by proportional representation.

I should be in one big, regional district that covers greater Los Angeles. This district, like all regional districts, would have multiple members (the exact number determined proportionally by the population of the region) who are selected by proportional representation. So that every vote counts.

Of course in American politics - where narrow thinking is the norm - the idea of multi-member districts and proportional representation is considered radical. So we're stuck with what is "normal"-a political world in which a two year old can swing through three Assembly districts on one 10-minute-long tricycle ride.

(Joe Mathews is a journalist and Irvine senior fellow at the New America Foundation, Fellow at the Center for Social Cohesion at Arizona State University and co-author of California Crackup: How Reform Broke the Golden State and How We Can Fix It. Mathews blogs at foxandhoundsdaily.com where this column was first posted.) –cw