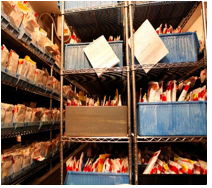 LA’S RAPE-KIT BACKLOG - How does Los Angeles allow thousands of rape kits to sit on a shelf collecting dust while rapists walk free?  A lack of leadership, that’s how.

On April 27, 2011, city officials took a victory lap around City Hall in celebration of the elimination of the backlog of rape-evidence kits that had grown in recent years to more than 7,000 untested kits.

Every city official that self-servingly posed for the cameras on April 27 was in office – and in a senior leadership role of one form or another – during the years the rape-kit backlog grew and grew and grew.  The one city official that deserved credit for the elimination of the backlog – former Controller Laura Chick – was not there.

The big question they all came to answer – and take credit for – was how the rape-kit backlog was eliminated.  The question they should have all been answering was why they allowed more than 7,000 DNA samples from rape victims to sit on shelves for years collecting dust while statutes of limitations ran.

If that had been the question being asked, however, the elected officials would have politely “passed” on the press conference.

Politely “passing” on press conferences calling attention to this crisis is exactly what they were doing back in 2007 and 2008 when victim-advocacy groups were standing on the steps of City Hall demanding action.

When the question was why the rape-kit backlog existed and was growing by hundreds per month, these elected officials were too busy for the cameras and, unfortunately, too busy for rape victims.

The rape-kit backlog was eliminated because victim-advocacy groups representing rape victims refused to be ignored.  When victim-advocacy groups could not get results from elected officials in City Hall, they went to the media.  They went to the Los Angeles Daily News, the Los Angeles Times, talk radio, and every other media outlet that would listen.

Frustrated with continuing inaction from City Hall, representatives from these victim-advocacy groups contacted me directly as they knew I would expose this injustice on my show and call out publicly those that were to blame.

In response to media calls for immediate action, city officials used one of the oldest excuses in the book – lack of funding.  However, on August 18, 2008, the Daily News set the record straight writing that “there’s money available if police officials really need it.  In fact, the LAPD hasn’t even spent $1.3 million in federal grant funds intended for that very purpose.  And the department’s failure to use that grant money prompted the feds to significantly reduce the grant money this year.”

The Daily News continued – “The money excuse is just a facile brushoff.  What’s missing isn’t cash; it’s accountability and a lack of political will.”  Daily News 8/18/08.

To add insult to injury, city officials have known for years that the backlog was growing.  “City Hall has been saying for years there’s a backlog, but has never done much about it.”  Daily News 8/18/08.

Then, the one city official that deserves credit for helping to solve the crisis, then-Controller Laura Chick, stepped up with an audit of the backlog and a press conference on the steps of City Hall.  Chick’s audit blasted city officials “for leaving thousands of victims without justice.”  Daily News 10/25/08.

Chick’s audit results were picked up by news outlets around the country.  This public embarrassment of city officials, brought on by dedicated victim-advocacy groups who were tired of being ignored and tired of the lack of “political will” in City Hall, finally set the wheels in motion to eliminate the backlog.

Indeed, the Los Angeles Times confirmed in its April 27, 2011 story that it was “pressure from victim-advocacy groups,” not pressure from elected officials in City Hall, that forced then-Chief William Bratton “to acknowledge and vow to address the thousands of pieces of DNA evidence that had sat untouched for years.”  LA Times 4/27/11.

To his credit, Mayor Villaraigosa admitted during the April 27 press conference that city officials had “let justice wait” and that “every sexual assault evidence kit [represents] an individual – a mother, a daughter, a friend – who rightfully deserves justice.”  LA Times 4/27/11.

The fact that many of the city officials that sat idly by as the backlog grew while refusing to take real action until chided by the national media were the same city officials preening for the cameras and claiming credit for the elimination of the horrible backlog at an April 27 press conference is a just another illustration of what is wrong with current city leadership.

(Kevin James hosts the Kevin James Show on conservative talk radio station KRLA in Los Angeles. He is also a candidate for Mayor of Los Angeles. More about James at krla870.com) -cw