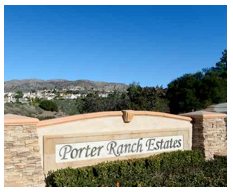 VOICES--The gas leak above Porter Ranch — which has attracted national attention and a lawyer feeding frenzy, reportedly sickened several thousand residents and prompted a mass exodus to temporary housing — is also casting a pall over the residential real estate market in the wind-raked upscale enclave of mostly gated communities.

Most of the homes cost more than $1 million, but they are probably worth less today than when the leak at well site SS 25 in the Southern California Gas Co.’s huge Aliso Canyon storage facility in the Santa Susana Mountains was discovered on Oct. 23.

By comparison, October’s median home price in the Valley was $562,000, according to the Van Nuys-based Southland Regional Association of Realtors.

In addition to the leak, residents are concerned … (Read the rest.)