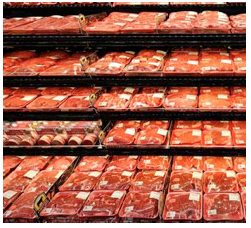 ANIMAL WATCH--The World Trade Organization ruled on December 7 that requiring country-of-origin labels (COOL) on packaged meat in the U.S.--listing where animals were born, raised, and slaughtered—forces an undue burden and unfavorable treatment on livestock producers and processors in Canada and Mexico.

The determination by the Arbitrator was that “the annual level of nullification or impairment of benefits” accruing as a result of the COOL labeling is $1,054.729 million to Canada and $227.758 million to Mexico. Thus, the U.S. can be forced by to pay $1 billion annually in combined retaliatory tariffs to its two NAFTA partners if this requirement, enacted by Congress in 2002 and 2008 farm laws, remains in effect.

The ruling comes just two weeks after the WTO also ruled that U.S. "dolphin-safe" tuna labeling poses a "technical barrier to trade" that must be eliminated or weakened.

In a May 8, 2015, speech urging passage of the Trans-Pacific Partnership (TPP)--a controversial, massive alleged "free trade" agreement between the U.S. and 11 other countries-- the President assured skeptics and critics, “No trade agreement is going to force us to change our laws.” But it just did!

In anticipation of the COOL ruling by the WTO, the House of Representatives passed HR 2393 by a vote of 300-131 on June 3, to repeal country-of-origin labeling for beef, pork, and chicken. Rep. Michael Conaway (R-TX) introduced the bill the same day the WTO rejected the U.S. appeal.

Rep. Earl Blumenauer (D-OR) argued that the rush to repeal COOL, and to go beyond the disputed elements of the ruling by adding poultry, raises questions about the government’s ability to give consumers protections they want.

But, this was the fourth time the WTO ruled against U.S. attempts to revise COOL, Rep. Dan Newhouse (R-WA) advised, and the loss of this final appeal gave both Canada and Mexico the authority to impose combined retaliatory tariffs against the U.S. within 60 days of the ruling.

It now appears the final decision bypassed further delays or debate by the Legislature by being tucked into the 2016 Budget omnibus bill.

Rep. Dan Benishek (R-MI) stated in supporting HR 2392, “Mandatory food labeling is not about food safety.  No matter where our food comes from, regulations remain in place to ensure safety and traceability regardless of origin.”

That is not necessarily true.

In February 2013 three arrests were made in England in the investigation of meat sold in Europe labeled as beef but testing positive for DNA from horses. This meat-fraud scandal rocked all of Europe and made Americans  question the safety of the U.S. beef supply.

Meat from British horses was discovered in takeout burgers and kebabs on February 11. The burgers were labeled as beef and the kebabs as lamb. There were indications that retired racehorses and ponies could have been sold as regular meat. Officials revealed that the manager of one of the facilities, Peter Boddy, 63, had a contract to kill racehorses and also had a past record of selling “unfit” meat to the public.

The complexity of this scandal was mindboggling and was blamed by officials on the fact that so far there had not been an agency in the EU tracing the testing of meat as it passes from county to country in various forms.

As the investigation spread across 16 EU countries, it culminated in the speculation that things in Europe were so far out of control that a Romanian slaughterhouse might be mislabeling donkey meat as beef.

That same week, Nestlé, based in Switzerland and one of the worlds’ food giants, announced it was removing pasta meals from stores in Italy and Spain because DNA tests show a level of more than 1 percent horse meat.

Wal-Mart Stores, Inc., recalled donkey meat sold at some of it outlets in China after testing showed it contained DNA from other animals, Reuters reported in December 2011. China slaughtered 2.4 million donkeys in 2011, according to the report.  The Shandong Food and Drug Administration announced that the tainted “Five Spice” donkey-meat product also contained fox meat.

It is legal to slaughter and consume dogs and cats in Canada.

U.S. animal shelters, humane societies and private “rescues” transport thousands of homeless dogs and cats per year to Canada by truck and air to reduce their stats and appear “no kill.”

A 2011 article, “L.A. Shelter Dogs Transported to Canada: Rescue or Ruse?, in which L.A. Animal Services GM Brenda Barnette was quoted, reveals the transport of hundreds of unwanted pets from Los Angeles city shelters to Canada, where “…volunteers bring up to 19 at a time across the border.”

Paws for the News - News Team advises in an April 2015 report that “It is Legal to Consume Dogs and Cats in Canada.”

The Star.com/Canada, on June 24, 2015,alsoconfirmed dog meat is legal for slaughter, sale and consumption, “[S]laughter of food animals in Canada is provincially licensed, which means meat-plant operators must obtain a license.” The Capital Health Authority told the CBC, “To be available to serve in a restaurant and for the public, the meat has to be inspected."

CBC News/Canada reported in Nov. 2003 that four skinned canine carcasses in a freezer at an Edmonton restaurant were tested and identified as coyotes.

In a compelling series for Forbes.com, Vickery Ryeckhoff writes about the racing industry, “More than 10,000 U.S. Thoroughbreds a year ship to slaughterhouses in Canada and Mexico... racehorses—and horses in general—may be beloved among Americans, they may be celebrated by the media, but they suffer worse abuse than the routine brutality that cows endure at slaughter.”

American concerns with the WTO decision to punish the U.S. for country-of-origin labeling goes far beyond just which country provides meat. As COOL slips away and inspections decrease, there will also be less monitoring of antibiotics and steroid pumped into farm animals to maximize meat production and having a yet- undetermined affect on humans who consume them.

Will Americans trust that no matter where our food comes from, regulations remain in place to ensure safety and traceability regardless of origin?  Or, will they rethink eating meat?

(Animal activist Phyllis M. Daugherty writes for CityWatch and is a contributing writer to opposingviews.com.  She lives in Los Angeles.)