But Los Angeles Times political reporter Christine Mai-Duc tells us that if you look around the factory floor where these hats are being made by the thousands, you’ll find faces that don’t seem to fit into Trump’s America.

The factory that makes the hats is Cali-Fame factory, it’s about 20 miles south of downtown Los Angeles, dozens of employees, almost all of them Latino, were working away while machines whirred all around them.

Mai-Duc interviewed one of the factory’s employees, Yolanda Melendrez who is an immigrant from Mexico was brought to the United States by her parents when she was a baby, has worked at the Carson-based Cali-Fame headwear company since 1991. 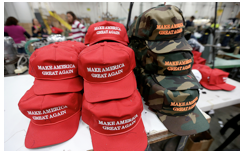 “When we first got the order for the Trump hats she said to herself, ‘Just wait until he sees who’s making his hats. We’re Latinos, we’re Mexicans, Salvadoreños.’”

Melendrez, 44, started out as a machine operator, stitching the seams of baseball caps. She now works as a lead on the floor, roaming as she checks on the flow of work, supervising other sewing machine operators and embroiders. She became a citizen when she was 20; her parents are permanent residents. Melendrez was 14 when she had her first child, and the job has helped her pay rent and put food on the table for her kids, she says.

Brian Kennedy, president of Cali-Fame, told Los Angeles Times that when the Trump campaign asked his family business to make the now-famous hats, he knew he would need to address his workers. “I said to them, ‘We’re not political. We’re here to work … and I haven’t gotten any negative comments.”

This headwear is legitimately made in the USA, creating jobs for people who hail from the very places Trump has at times disparaged. 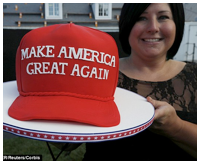 The company employs about 100 people in a 30,000-square-foot warehouse. About 80% of the company’s workforce is Latino, Kennedy estimates. He says that every worker has his or her immigration status verified.

The "Make America Great Again" hats have been a boon to Kennedy’s business, which pulled in more than $270,000 from the Trump campaign last quarter, according to campaign finance records.

The merchandise was a portion of the more than $825,000 the Trump campaign dropped on bumper stickers, T-shirts, hats and other promotional gear, the largest category of Trump's spending outside of travel.

The hats have been a boon for Trump's campaign too. They sell for $25 each and appear to have boosted the billionaire's small donations column, making donors of those who purchase them, ironically or not.

Melendrez also told the Times that she’s heard some of the things Trump has said about Mexican immigrants and Latinos like her, but she attempts to ignore them, even as headlines about Trump’s proposals to build an impenetrable wall on the border of Mexico and his comments writing off some Mexican immigrants as rapists and criminals continue to dominate coverage of the Republican front-runner's campaign.

“A lot of what Trump says about Latinos is not correct,” Melendrez said, but “he’s giving us a lot of work … keeping us busy … it’s a job, I get paid to do it and it pays my bills.” And for that, Melendrez said, she’s thankful.

This is yet another story of the many Latinos who make Los Angeles, and our country great … now!

(Fred Mariscal came to Los Angeles from Mexico City in 1992 to study at the University of Southern California and has been in LA ever since. He is a community leader who serves as Vice Chair of the Los Angeles Neighborhood Council Coalition and sits on the board of the Greater Wilshire Neighborhood Council representing Larchmont Village.  He was a candidate for Los Angeles City Council in District 4. Fred writes Latino Perspective for CityWatch and can be reached at: [email protected])