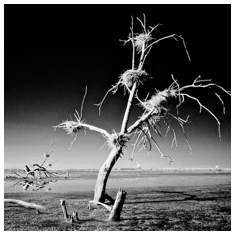 ARTS POLITICS--Bad enough that the climate is changing and humans are causing it; worse, most of us don’t even want to talk about it.

“Where are the books? The poems? The plays? The goddamn operas?” asked author and climate activist Bill McKibben a decade ago on Grist, comparing the climate crisis to the AIDS epidemic, which, McKibben noted, produced “a staggering outpouring of art that, in turn, has had real political effect.”

To be fair, that has started to change: Authors such as Paolo Bacigalupi (The Water Knife) and filmmaker Larry Fessenden (The Last Winter) have begun to address environmental catastrophe in their works. But it’s likely that other authors, artists and goddamn opera writers have assumed that their climate-focused work would struggle for an audience: A recent Pew Research Center poll found that only 42 percent of U.S. citizens consider rising seas and global temperatures disturbing. (Europeans are more worried about Russia; Russians are worried about money.)

Writer-director Guy Zimmerman, the longtime artistic director of the Padua Playwrights group, remembers hearing a group of scientists talk about the climate’s public relations problem at a conference a few years ago.

“They were so demoralized,” Zimmerman tells Capital & Main. “They said they’d been saying the same things for 20 years and no one was listening.” It struck him that humans were due for a shift in the “narrative paradigm.” Instead of presenting the climate crisis as an apocalyptic fiat over which the ordinary human has no control, he wondered, why not see it as an opportunity?

“It seemed to me that missing from the narrative was, ‘What’s the better world that we can create? How can we use the climate crisis as a way to change fundamental social relationships?’” They are questions, he says, that artists are uniquely equipped to ask. “When something terrifies you, you cling to what you know, you shut down,” he says. “Art has a way of breaking the spell of fear.”

It was with spell-breaking in mind that Zimmerman and writer-producer Cheryl Slean put together VisionLA ’15, a citywide festival to coincide with the United Nations’ annual climate conference, held this year in Paris from November 30 until December 11. The LA event includes films, performances, talks and art exhibits in venues from the Westside to downtown, from the University of Southern California campus to the San Fernando Valley. There are even occasional podcasts by story performer Heather Woodbury that will conclude during the festival’s two weeks.

“We didn’t curate,” says Slean, who came up with the idea in May while working on ways for the climate-activist group SoCal 350 Climate Action to participate in the Paris talks.

“We just brought in advisors and said, ‘Go! Spread the word, open the door. Let’s take it all.’”

The response astonished her. Almost as soon as Slean put the word out, Santa Cruz Film Festival founder Jane Sullivan stepped up to put together a film series, and “we went from having four films to 20,” Slean says.

The managers of several venues, including the Helms Design Center in Culver City and the Armory Center for the Arts in Pasadena, offered space. “They said, ‘Look, we’re open these days with nothing scheduled — just program what you want, you can use us for free.” Two downtown-based art curators, Dale Youngman and Lilli Muller, assembled a dedicated exhibition, “Art Makes Change,” to present at Santa Monica’s Bergamot Station for the duration of the festival.

“For me it was completely an experiment in how systems work,” Slean says. “It’s the perfect ‘beginner’s mind.’”

Other festival highlights include a talk along the LA River with artists, scientists and educators (December 6); a found-object assemblage workshop with artist Dominique Moody (December 5); and “Words to Save the World,” where a group of writers and poets will gather at Beyond Baroque in Venice to present work on environmental topics.

Still more events around the city will happen concurrently, in partnership with the festival: Timothy Watkins from the Watts Labor Community Action Committee, for instance, has collaborated with students at Cal State Dominguez Hills to present photography documenting the environmental degradation going on in South Central. The exhibit isn’t precisely climate-related, but it fits.

“They’ve had 100 years of being the front line of industrial toxic pollution,” Slean says. “People who live there are affected, from generation to generation.”

There will be music, too: On December 9, the Los Angeles Philharmonic’s Vicki Ray will premiere her piano piece, “Disappearing Waters,” with the Mothers of Invention’s Don Preston on organ at the First Congregational Church of Los Angeles. Other LA Phil members will play at jails and in homeless shelters during the event. If that moves you to wonder what music has to do with the climate, the church’s Dr. R. Scott Colglazier will moderate a post-concert panel on precisely that topic.

Slean and Zimmerman both hope VisionLA becomes a repeated event tied to the annual climate talks — only next year, with more resources.

“This year we had no money and no time,” Slean says, “which means we’ve relied on long hours from volunteers.” On the plus side, “we have no corporate logos.”

The festival’s almost magical random self-organizing is “an example,” Slean says, “of what can be done with intention.” It’s also a metaphor: “It proves we can make change — we just need to step up and do it. And find the community that can help us do it.”

A full schedule of performances, with maps to venues, is online at Visionlafest.org.

All festival images on this page courtesy of the artists.

(Judith Lewis Mernit is a contributing editor at High Country News. Her writing has  appeared in Mother Jones, Sierra, and the Los Angeles Times. This piece was posted earlier at Capital and Main.)