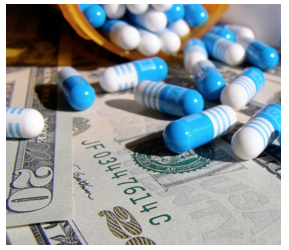 Creating the world's largest drugmaker—and paving the way for higher pharmaceutical prices—Viagra-maker Pfizer Inc. and Allergan PLC, which manufactures Botox, said Monday that they would merge in a so-called inversion deal worth up to about $155 billion.

The takeover "would be the largest inversion ever," according to the Wall Street Journal, allowing Pfizer to profit from a lower corporate tax rate in Allergan's home country of Ireland.

The LA Times reported that the deal "is likely to fuel critics' concerns that consumers would pay even more for drugs as competition declines among manufacturers, insurers and retailers."

As Gustav Ando, research director for the business information and consulting company IHS Life Sciences, told the Washington Post: "This merger isn’t meant to benefit patients, it isn't meant to innovate in any kind of way...and certainly the benefits won’t be passed on to consumers."

Addressing this aspect of the deal, presidential candidate and U.S. Sen. Bernie Sanders (I-Vt.) said Monday that the merger "would be a disaster for American consumers who already pay the highest prices in the world for prescription drugs."

While Pfizer cried poor in an effort to justify the merger—saying the U.S. corporate tax regime was forcing it to compete against foreign rivals "with one hand tied behind our back"—the coalition Americans for Tax Fairness showed earlier this month that the company had in fact "dramatically overstated its corporate tax rates" and was already enjoying a significant competitive advantage over those who pay their fair share.

And a Citizens for Tax Justice report released last month found that Pfizer has a stunning 151 subsidiaries in known foreign tax havens—more than all but five other Fortune 500 corporations.

On Friday, the U.S. Treasury Department unveiled new rules aiming to curb tax-lowering inversion deals. But even at the time, analysts said "there was scarce evidence they would stop the biggest inversion of them all, between Pfizer Inc and Allergan Plc." The Obama administration has said Congressional action is necessary to eliminate corporate inversions for good.

(Deirdre Fulton writes for Common Dreams … where this article originalted.)