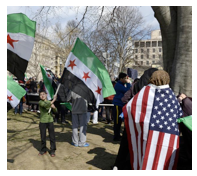 POLITICS OF SAVING LIVES-The plight of refugees fleeing from the Islamic State in Syria has been transformed into a politicized battle on the national, state, and even local fronts.

On the national stage last week, the House passed H.R. 4038, the American Security Against Foreign Enemies (SAFE) Act, the strictest ever vetting process for people fleeing from a war-torn nation, requiring the Director of the FBI, the Director of National Intelligence, and the Secretary of Homeland Security to unanimously certify that a particular refugee does not pose security threats.

The SAFE Act passed by a vote of 289-137. Out of the representatives from districts representing LA, only two, U.S. Rep. Janice Hahn (CA 44th) and U.S. Rep. Pete Alguilar (CA 31st) voted to support the bill’s passage.

House Resolution 4038 will go to the Senate following the Thanksgiving break, perhaps opening a discussion of an alternative proposal co-sponsored by Sen. Dianne Feinstein (D-CA) and Sen. Jeff Flake (R-AZ) that would place restrictions on the Visa Waiver Program, which many experts believe may pose a more plausible threat to security than refugee resettlement.

The VWP permits citizens of participating countries (which includes many EU countries) to travel to the U.S. for 90 days or less without a visa if they meet certain requirements. For example, the purpose of the visit must fall within certain tourism or business restrictions and the travelers must have a valid pre-approved Electronic System for Travel Authorization approval.

The Feinstein-Flake bill would ban Europeans who have traveled to Iraq or Syria in the past five years from entering the U.S. through the VWP.

Since the Paris attacks, a majority of U.S. governors and a number of mayors have vowed to not allow Syrian refugees to settle in their states, which seems to be more of a political move, as immigration and refugee resettlement fall under federal jurisdiction, upheld by the U.S. Supreme Court as recently as 2012.

Furthermore, the 14th Amendment and equal protection laws in individual states prevent states from using nationality as a factor to bar entry to people.

Despite what appears to be more of a symbolic gesture by these public officials, both Gov. Jerry Brown and Mayor Eric Garcetti have vowed their support for refugees.

Last week, Brown told reporters, “I intend to work closely with the President so that he can both uphold America’s traditional role as a place of asylum, but also ensure that anyone seeking refuge in America is fully vetted in a sophisticated and utterly reliable way. You can be sure that we will do everything in our power to protect the people of our state.”

In September, Garcetti joined 18 mayors including Bill deBlasio (New York City) and Rahm Emanuel (Chicago) who wrote to the president as part of the Cities United for Immigration Action coalition to express their support for welcoming Syrian families to “make homes and new lives” in their cities.

The refugee crisis has prompted misinformation about the resettlement process and even statistics of who these refugees are. According to the independent political fact checking site PolitiFact, just over 1,800 refugees have been admitted to the U.S. since the start of the Syrian civil war. During the first three years, the number of Syrian refugees amounted to about 30 per year. In comparison, Germany has accepted 38,500 Syrian refugees and Canada has accepted 36,300 since 2013.

Are these refugees all “single fighting-age young men?” Half of Syrian refugees admitted thus far have been children. Only about two percent of refugees have been single men of combat age.

Yet another point of contention rests in the rigor of the vetting process. Though the House bill would impose a few more steps, refugees already face a pretty grueling two to three year process before being granted permission to enter the U.S.

Even before they face U.S. screening, refugees must have a referral from the United Nations High Commissioner for Refugees. Occasionally, the referral may come from the U.S. Embassy or another NGO. About one percent of refugee candidates end up being referred by the UN process, which takes four to ten months. The process not only decides which refugees to accept but also if they will require resettlement and which countries might accept them.

Refugees passed along to the United States then face additional security clearances with names, fingerprints, and biographical information run through both federal terrorism and criminal databases. The refugees are interviewed by Homeland Security and if approved, go through medical screening, a match with sponsor agencies, cultural orientation, and a final security clearance.

Syrian refugees face additional security clearances with documents placed under extra scrutiny and cross-referenced with classified and unclassified information, a process that typically takes an additional year or two before they set foot in the United States.

The majority of refugees from Syria and Iraq will not settle in the U.S. because of proximity and other issues. Turning away people who are tortured in their home countries is not a guarantee of safety but a knee jerk reaction to garner political support among constituents during uncertain times. We are better than that.