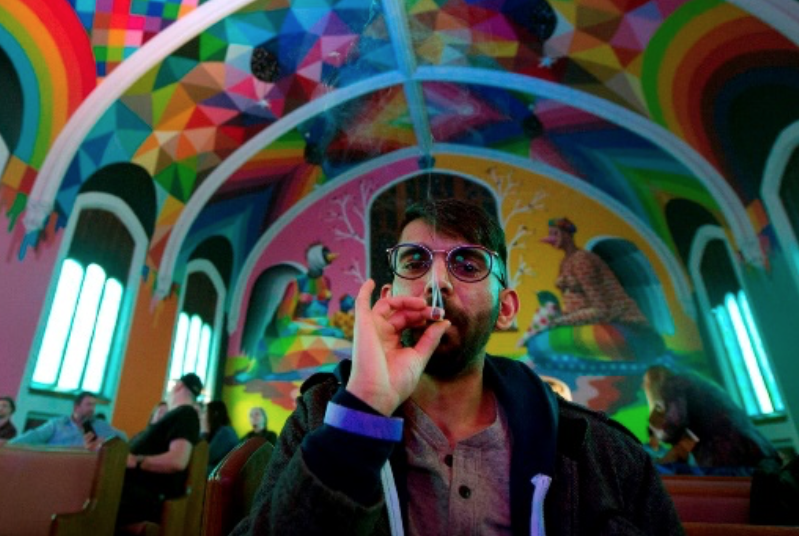 420 FILE--As marijuana becomes legal in more and more states, public-health officials are asking important questions: Does smoking pot really give people the munchies? And if so, is the wider availability of the drug making Americans even more obese?

Two new studies suggest that the answers to those questions are yes and no, respectively. One finds that people who are high on cannabis do indeed prefer unhealthy snacks. The other reports that pot smokers are actually a bit thinner, on average, than those who don't partake in the drug.

For the first study, a research team led by Jessica Kruger of the University at Buffalo visited the 2016 Hash Bash, "an annual public forum on a university campus in the Midwestern U.S. advocating for the reform of cannabis laws."

The study's 248 participants, 80 percent of whom reported being at least "somewhat high" at the time, filled out a survey about the foods they typically eat after smoking pot. Afterward, they were offered either a bag of chips or an orange as a thank you gift.

Unsurprisingly, 61 percent chose the unhealthy snack, vs. 32 percent for the healthy one (the remainder passed on both). Their written answers were even more lopsided, as 77 percent reported eating unhealthy food while high, as opposed to 23 percent who typically ate something healthy. (Seven percent said they avoided eating anything while high.)

In addition, "participants reported eating more food when under the influence of cannabis compared to at other times," the researchers write in the journal Human Ethology. They conclude that this finding suggests "the need for tailored nutrition education among the population of cannabis users."

Or does it? Another new study—one featuring nearly 30,000 participants—reports that regular pot smokers actually gained less weight over time than people who did not use the drug.

Omayma Alshaarawy and James Anthony of Michigan State University analyzed data from the National Epidemiologic Survey on Alcohol and Related Conditions, which was designed to "produce nationally representative estimates for the U.S. population."

Participants were surveyed in 2001–02 and again in 2004–05. After the second round, 77 percent were classified as having never smoked pot; meanwhile, 18 percent had stopped using it since the first survey, 3 percent had started since that survey, and 2 percent used it both then and now.

"Over a three-year period, all participants showed a weight increase, but interestingly, those who used marijuana had less of an increase compared to those who never used," Alshaarawy said in announcing the findings. "We found the users, even those who just started, were more likely to be at a normal, healthier weight and stay at that weight. Only 15 percent of persistent users were considered obese, compared to 20 percent of non-users."

Writing in the International Journal of Epidemiology, the researchers concede they aren't sure what accounts for the results of this second study. While they don't raise the possibility, it stands to reason that if a fair amount of unhealthy eating is driven by stress or anxiety, the relaxing qualities of marijuana could help curtail that dangerous dynamic.

As with so many questions related to cannabis legalization, the drug's long-term impact on obesity remains uncertain. Like pot smokers themselves, the odds we'll need more data to reach a definitive conclusion are quite high.

(Tom Jacobs is a senior staff writer at Pacific Standard, where he specializes in social science, culture, and learning. He is a veteran journalist and former staff writer for the Los Angeles Daily News and the Santa Barbara News-Press.)