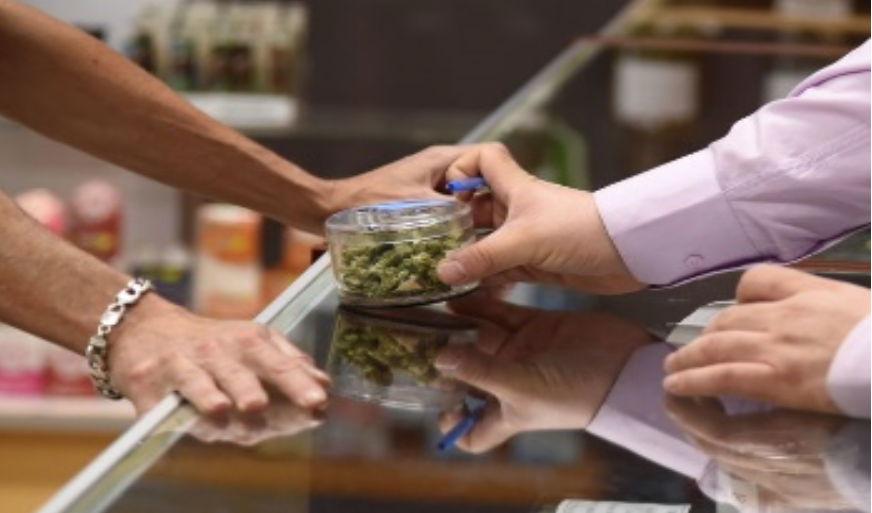 420 FILE--It’s just cannabis, right? How important can something affectionately referred to as “wacky-tabbacky” be? In my case, very.

In 2015, I nearly died from a vitamin B12 deficiency (because that’s a thing), which catapulted an evil disease called fibromyalgia into the center of my world ― and then totally imploded it. I was completely debilitated and lucky to leave my sickbed once a week. There is no way I would have gotten through the worst of it without cannabis to manage both my symptoms and the depression that came with them. No. Fucking. Way. (But, of course, you should always consult your own physician or mental health professional before trying any drug or medication.) It was an incredibly hard time, to put it mildly.

Finally, after two and a half intense-yet-dull years of medical tests, bedrest, physical therapy and intensive self-care, I was healthy enough that rejoining the working world started to seem like an option. I was homeless at the time after moving to the warm Los Angeles area from rainy Portland at the advice of a doctor. I hadn’t been able to find affordable housing or reliable work I could physically perform. I was starting to accept the idea that I’d be a homeless cover letter-writer for the rest of my days. Then, miraculously, an incredible job landed in my lap.

After posting about my beloved cannabis on Instagram, a follower-turned-friend introduced me to the manager of a nearby dispensary who then kindly hired me to do their marketing for as many hours as I could handle (whew!). Sadly, the position was phased out of existence after six months due to budgetary restrictions. But it was a brilliant introduction to the industry and helped me get back on my feet.

Here are a few things I learned during my first professional stint in the weed industry:

It’s like working for any other business: I don’t know what I expected on my first day ― I’m sure images of the police showing up (never saw one) and the sounds of reggae (which I did hear! along with all kinds of tunes) ran through my head ― but I know I didn’t imagine the Keurig machine. In many ways it was, surprisingly, like any other job I’ve had: It involved a very typical management structure; there was software to learn; we attended morning meetings; and there were never quite enough (or the right) office supplies in stock. All in all, it was totally the standard stuff you’d encounter in any other workplace.

It’s nothing like working for any other business: On the other hand ― oh look, there’s a big stack of cash, video cameras and armed guards and, of course, ginormous bags of herb! I got to weigh and package the cannabis buds (known as “flower”), and playing with cannabis while chatting with customers was definitely unlike any experience at an office I’ve ever had. Even after time began to be filled with duties typical of a more traditional marketing position, I still often found it hard to believe I was getting paid to do things like describe the particular high of a cannabis strain or take photos of herb. I even got to create a giant cannabis painting for a photo-op background.

People can be real jerks about getting their cannabis: I assumed our customers would be all chill and thrilled to be at their local weed store. Nope! My guess is that some of the crankier people who visited the store were folks in need of cannabis for medicinal use, and being sick is always an understandable reason for crankiness ― especially if we didn’t have what they needed in stock. We had lots of friendly, laid-back visitors to the dispensary ― the majority, in fact, were that way ― but I was still surprised by the noticeably high jerk ratio. (Still, I’d bet most of them were much more likable once they were able to enjoy our product...)

But it has good people: I’ve worked in many offices and generally felt like a weirdo, even before I started dying my hair purple. But I never felt like an outsider at my dispensary. Hugs were given out on the regular and it was safe to tell stories and share opinions without having to majorly censor yourself. So far I’ve found that kind, funny, hard-working, passionate badasses dominate the industry.

Cannabis is an industry in flux: Recreational cannabis use in California only became legal on Jan. 1 ― and just 10 months in, it’s a total shitshow. New compliance regulations are released by the government all the time, and they often leave dispensaries and manufacturers scrambling to adhere to them or risk losing their licenses. Even with licenses intact, adjusting to the changes can leave businesses temporarily unable to serve their customers and patients.

What’s more, illegal dispensaries are still flourishing right out in the open while authorities use their time, energy and resources to make sure the licensed ones are following the new, and often very vague, rules to the T. The fact that cannabis is still federally illegal also makes thinks like banking tricky, which in turn causes daily annoyances and can lead to huge problems, like the inability to pay employees or vendors.

Cannabis is a gloriously complicated plant: The therapeutic effects of cannabis seemed magical to me when I started working in the industry, and oh, how I loved the glory of discovering exactly why. It turns out our bodies have something called endocannabinoid systems (ECS), which work with plant compounds called cannabinoids ― THC and CBD are popular ones, but there are so many others. Each cannabinoid engages with the ECS, which then activates their distinct superpowers and thereby helps alleviate suffering from a huge range of ailments. Many cannabinoids are even capable of working their magic without getting the user stoned, a benefit for those who are seeking relief without looking to get high.

There’s so much more to do with cannabis than just smoke it: I was in love with my vape pen ― a device that uses a battery to warm cannabis oil in a cartridge and then produces a vapor the user inhales ― when I started the job. But I had no idea how many other ways to partake in the plant there were out there. My favorite cannabis product is the tincture: I drop some THCa (a cannabinoid) oil under my tongue a few times a day, which helps my nerve pain like whoa. There are also topical solutions that are applied to the skin, edibles you eat or drink, capsules you take like a pill, patches to slap on your body for longer-term relief, even cannabis lube.

Cannabis isn’t just for eating Funyuns and watching goofball movies (though it’s great for that too!): Working in a dispensary taught me just how multifaceted cannabis really is. In addition to what it can offer those suffering from various ailments, different strains of cannabis and different cannabinoid profiles can also provide different users different experiences. If want to become one with your couch and enjoy satiating your munchies, there are strains for that. But there are also strains that are better for socializing, others for being productive, and some for using before or during sexual experiences. You can visit a dispensary and find exactly the strain you want or need for whatever activity you have planned. The notion that cannabis just makes you lazy only exists because people haven’t learned exactly what cannabis is capable of or the myriad ways it can be used.

Related article:  What is CBD?

Cannabis is for everyone (of legal age, of course): Pop culture often portrays cannabis users as predominantly male 20-something slackers, but that’s definitely not the case. The combination of decreasing stigma, increased studies on cannabis’ benefits, and the availability of cannabinoids that don’t get users high have all kinds of people interested in trying the plant. Grandmas, school teachers, rich people, poor people ― we served them all at my dispensary. After a few weeks in my position, I was no longer shocked by the wide variety of people who came in to purchase cannabis. The only people who surprised me were the ones who weren’t wearing any shoes, which happened three times in one week before we made a sign requiring footwear in the store.

Cannabis used to be sold in pharmacies all across America: I got to do a lot of fascinating research related to my position at the dispensary and cannabis prohibition was one of the most interesting topics I learned about. The plant used to be popular at U.S. pharmacies until 1937, when the Marijuana Tax Act was passed and the first major federal limitations on the sale and use of cannabis went into effect. Before then, it was legally sold in tincture form to treat many ailments. Then, after alcohol prohibition was overturned 1933, cannabis became the new target. A real peach of a man named Harry Anslinger led the charge, demonizing the plant and calling it “marihuana” to make it sound like a different drug than the popular “cannabis” ― and threateningly foreign to boot. He once reportedly said, “Reefer makes darkies think they’re as good as white men.” His horribly racist strategies were horribly effective, which greatly contributed to both the remaining stigma associated with cannabis and the current systemic mess we’re attempting to clean up with legalization and regulation of the drug. This is why you shouldn’t refer to the plant as “marijuana,” a word with a racist history. Instead use its proper name, “cannabis,” or one of its many other colloquial names, like “weed” or “herb.”

I feel optimistic and excited about the future of the cannabis industry, despite its current messiness. Aside from legal issues, I believe a lack of education about the plant causes a lot of the troubles related to what cannabis can and can’t ― or should and shouldn’t ― do. I’ve been a cannabis fan for much of my adult life and I’ve lived in a state where it’s been legal for recreational use since late 2015. Still, I was stunned by the massive amount I learned during my brief time working in the industry. If someone like me wasn’t fully aware of the power or potential of this plant, I can only imagine what folks who have never tried it or researched it know ― or don’t know ― about it.

I’m not alone in my passion for spreading accurate information about cannabis. Working to alleviate stigma and misinformation is also included on the manifestos of many cannabis companies. The industry is aware of the problem and is passionately working to find creative ways to address and bust the myths and straight-up lies about cannabis that continue to circulate. Hopefully our lawmakers and those tasked with enforcing the current laws will get on board and work with the industry to regulate cannabis and make it safe and available to everyone.

Cannabis is so much more than another way to relax with friends on a Friday night. I’m grateful to have learned so much and to have met some really amazing people while working in the industry and I’m hoping I’ll soon land another job that will allow me to continue to share the life-changing ― and incredibly enjoyable ― capabilities of this incredible plant.

(Meg Hartley has also written for Ravishly, Teen Vogue, MindBodyGreen, She Knows, and Tiny Buddha, among other outlets. She is the author of How I Lost All My F-cks, a mindfulness book/experience. This piece was posted most recently at HuffPost)