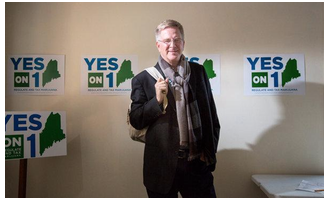 420 FILE--The legalization of marijuana is a more mainstream issue now than it has ever been.

That trend is both reflected and powered by the advocacy of people like Rick Steves, the mild-mannered travel writer and host of “Rick Steves’ Europe,” who campaigned for legalization in his home state of Washington in 2012 and now travels the country doing the same thing.

A 2017 Gallup poll found a majority of Americans — 64 percent — now support legalization of the drug in some form, including 51 percent of Republicans. While it remains illegal at the federal level, nine states plus the District of Columbia allow recreational use of the drug, and 30 states, D.C., Puerto Rico and Guam have comprehensive medical marijuana laws.

Medical marijuana is on the ballot in Missouri in November, and a political compromise reached earlier this month in deep-red Utah may pave the way for it there, too. Voters in North Dakota and Michigan will decide on recreational use of the drug.

Mr. Steves discussed his advocacy, his travels and the ballot initiatives. This interview has been condensed and edited for clarity.

Q: What did the path from European travel expert to cannabis activist look like?

I’ve spent a third of my adult life in Europe, four months a year ever since I was a college kid. It is fascinating to see how different societies grapple with the same problems.

In so many cases, the United States is into moralizing and mass incarceration. In Europe, a joint is about as exciting as a can of beer. When I am home, I see people I respect smoke marijuana, responsibly, and it’s a criminal act.

What really strikes me is people are not comfortable talking about it, to this day. When I started talking about this, I could understand that. I had to go on the radio with a pseudonym 15 or 20 years ago.

What was your pseudonym?

Greg. I was on this big radio show in Seattle as Greg, this responsible business leader who smokes marijuana responsibly. I said, “O.K., I am Greg.” I thought I was being incognito, but the next day in my town someone rolled down their window and said, “Hey Greg! We heard you last night!”

It all seems so silly. And it is silly if you’re a rich white guy because you can smoke with impunity. But I am tuned in to the reality of people who have a tough life and are disadvantaged, poor people and people of color. (Read the rest.)