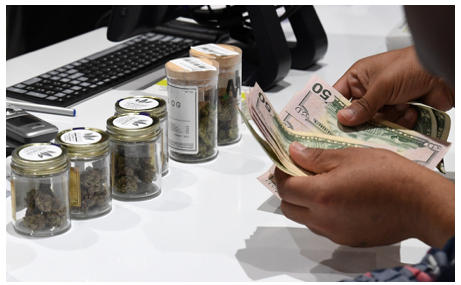 DEEGAN ON LA-Bring in the bean counters, or would that be the bud counters? Now that recreational marijuana is legal in California, thanks to overwhelming passage of Prop M that was approved by 80% of the voters last March, there will be a steady flow of new tax revenues streaming into the City and the State.

Cue the bandits: this is a 100% cash business right now, with money being moved around in duffle bags, with two very attractive robbery targets: weed and cash. The legalization and retail selling of recreational marijuana has created a public safety issue with all that weed and all that cash in storefronts and no banks where sellers can make deposits. And, so far, no credit card companies are willing to allow plastic transactions. Even if the revenues could get to a bank, they would be subject to Federal regulation, and the Feds have not legalized marijuana, so that would be a problem.

Councilmember Bob Blumenfield (CD3) has some suggestions for how to attack the problem and prevent the rise of a category of crime stats that could be called “code 420” -- robbing a marijuana store of its product and revenues and possibly harming employees and/or buyers in the process.

What Blumenfield suggests is a “cashless” process in which any licensed cannabis retailers would be prohibited by the City from either accepting cash for sales or submitting cash to pay tax. But, what’s the alternative? Blumenfield sees a “card” that’s analogous to a transit system TAP card, which holds “stored value” that the consumer has paid to Metro, and as the transit rider uses, or “taps” the card, that value is reduced. Yet to be defined in the Blumenfield model is where you would go to enter your stored value onto your cannabis purchase card, but some sort of smart phone app may be a possibility.

The advantage of having an electronic transaction is the immediate creation of detailed records of retailers, and the ability to monitor sales to be sure the right amount of taxes are paid. These “audits” would be live, in real time, and save a manual accounting step.

What are the tax levels for our weed sales, and where will the money go? States that legalized before us, like Colorado, Washington, Nevada, Oregon, Alaska, and the District of Columbia are already retailing. They have sent their revenues to a variety of destinations, such as a state’s rainy day fund, education, law enforcement, addiction treatment, and pass-alongs to cities and counties around the state.

What about our tax rates? The LA City Department of Cannabis Regulation (LA-DCR)has published this schedule, on top of which the State of California will impose a 15 percent excise tax on the purchase of medical and “Adult-Use” cannabis. And, cultivators will have to pay a tax on dry flowers ($9.25 per ounce) and dry leaves ($2.75 per ounce).

According to the LA-DCR, the City of Los Angeles will impose the following new business taxes effective January 1, 2018:

It’s getting this cash banked that’s causing some real concern. Councilmember Blumenfield says in his cashless marijuana business concept that “the (city) council must eliminate cash transactions by marijuana businesses. Currently, marijuana is bought and sold for large amounts of cash because it’s still illegal under federal law. Banks and credit card companies refuse to risk involvement because interstate commerce issues make them vulnerable to federal prosecution. But, Angelenos don’t have to accept the premise that cannabis must be a cash business -- the council can insist otherwise. There’s a better way to handle the excessive cash these businesses produce and collect the taxes due…”  He emphasizes that we need to take a “bold step of prohibiting the use of cash in marijuana transactions.”

How to handle the legitimate cash may not be the only concern. There will be strong competition for those marijuana sales dollars. Some retailers, known by the less gentrified name of “dealers,” will always take cash. There are black market operators and Mexican drug cartels that have decades of production experience and distribution pipelines. Both can put a huge dent in California’s weed sales -- and tax base.

This alternative form of retailing may lead to an economic danger ahead, according to global credit ratings firm Fitch Ratings, that recently issued an Illicit Sales warning.

They say, “High tax rates raise prices in legal markets, reinforcing the price advantage of black markets...California’s black markets for cannabis were well-established long before its voters legalized cannabis, and are expected to dominate post-legalization production.” A sobering thought that may give Blumenfield and city and state tax agents some buzzkill.

(Tim Deegan, is a civic activist whose DEEGAN ON LA weekly column about city planning, new urbanism, the environment, and the homeless appears in CityWatch. Tim can be reached at timdeegan2015@gmail.com.) Edited for CityWatch by Linda Abrams.