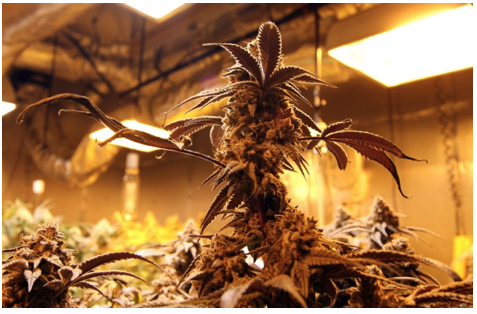 420-FILE--The Northern California fires that collectively burned hundreds of thousands of acres, destroyed nearly 6,000 homes, and killed 43 people across eight counties in October are leaving a legacy from which it will take the state will take years to recover, with insurance claims at $9 billion and rising.

Venturing through the city of Santa Rosa in Sonoma County, heavily damaged by the Tubbs Fire, reveals an apocalyptic, scarred landscape. In Mendocino County, the 37,000-acre Redwood Fire chewed through highway guardrails and whipped at high speed through the insular community of Redwood Valley. As evacuees made their way home, some arrived to find that their home was, in fact, no longer standing. Some are selling up and moving on.

While people make decisions about rebuilding housing, some are also worried about the future of one of Northern California's most famous agricultural products: cannabis. Sonoma and Mendocino are both heavy cannabis producers, and the fire couldn't have come at a worse time for farmers. On January 1st, 2018, a ballot measure allowing recreational usage of marijuana comes into effect, and the industry has spent the last year gearing up for it.

As the fires swept across the landscape they destroyed or heavily damaged at least some 34 cannabis farms. The banking industry is often reluctant to deal with the proceeds of a federally illegal industry. Because of that, explains Jolene Forman, a staff attorney with the Drug Policy Alliance, many within the business are unbanked and keep their funds in cash, often on-hand at the farm. When the fires came, it wasn't just the crops that went up in smoke; it was the money too.

And unlike the wine industry, cannabis cultivators can't benefit from community fundraisers designed to support their recovery—processing payments alone can be a major hurdle. One such fundraiser was actually frozen because the payments processor refused to do business with those connected to cannabis. Cal Growers, an industry association, has since launched its own fund.

Growers are also not eligible for funds from the Federal Emergency Management Agency. Federal assistance activated when Governor Jerry Brown made a disaster declaration, providing both financial and technical support for badly affected counties. But while cannabis farmers live and work in these counties, the federal government considers their work illegal, and won't extend a helping hand for recovery.

Moreover, these farmers typically lack crop insurance that could have compensated them for the loss of a multi-million dollar harvest. Paul Armentano, deputy director of the National Organization for the Reform of Marijuana Laws, explains that, contrary to popular belief, it's not actually impossible to insure cannabis crops; it's just pricy. Some insurance companies specialize in it, and are willing to take a calculated risk to work with cannabis farmers. But such insurance is costly, and farmers aren't necessarily aware it's an option.

The situation is worse than losing a crop, Forman notes. Those who have conventional insurance on their farms, such as homeowner's insurance, may find that their insurers are unwilling to pay out—they can argue that a farmhouse or barn was used in connection with an illegal industry, and that this wasn't disclosed on the policy, thereby making it void. Renters have even more limited recourse. Farmers who lost their homes along with their crops, in other words, may not be able to rebuild with insurance funds. "This is incredibly harsh and unfortunate for people who are trying to comply with state law, and trying to comply with local ordinances in anticipation of state licensing," Forman says.

Even in the case of those who didn't lose their crops in the fire, there are significant concerns how crops might have been affected by everything from heat to lack of water (farmers were unable to reach their properties) to chemicals used in fire retardants It's possible harvests may be unsaleable, depending on the outcome of lab testing for safety, and these tainted crops will be a loss as well.

This grim state of affairs has some worried that the damage may cause price shock, given that the destruction of the crop comes as the state will likely experience a spike in demand. But Armentano says this is unlikely, noting that many factors will be in play when it comes to pricing and availability on January 1st. For many cannabis farms across Northern California, dispensaries are well-equipped to source their goods elsewhere, though the creation of artificial scarcity could be used to justify mark-ups.

On an individual level, some farmers may be forced out of the industry, temporarily or permanently. Those who lost everything and don't have access to capital to rebuild are in a difficult situation. Some suggest this may drive farmers into the shadows and back into the state's black market, a harsh blow after years of work to legitimize the industry. Forman isn't so sure about that prediction, arguing that many in the industry want to work legitimately in the light and have access to the same benefits that other business owners do, from insurance to a clear regulatory framework.

Rebuilding in the aftermath has been complicated by another issue: The firestorm that broke out in Southern California just two months later, bringing substantial damage to communities in Los Angeles, Ventura, and Santa Barbara counties. Service organizations and generous citizens are stretched for resources as they address the needs of communities in both regions of the state.

Those resources aren't all financial in nature. Contractors and skilled laborers are in high demand thanks to the rebuilding effort, creating tremendous pressure on an already hot construction market. The cost of rebuilding even for those with insurance will be high; for those who are uninsured, finding and securing workers may be a challenge. Cannabis farmers will also need to reinvest in supplies and equipment at a time when legalization is driving demand, and prices, up.

Some things do work to the advantage of California's cannabis industry, starting with its status in the mainland United States. Disaster recovery is going very differently in Puerto Rico, where the basic needs of ordinary citizens, from working hospitals to safe drinking water, are going unmet. Meanwhile, the heavily white nature of the industry—a source of considerable criticism as legalization leaves black communities behind—increases access to social and economic capital.

While marijuana straddles an awkward divide between legitimacy and illegality, situations like this will continue. Legalization or decriminalization on the federal level could have made wildfire recovery a very different matter, one focused on quibbling with insurance companies over damage claims, haggling with FEMA over funding, and benefiting from the scores of community fundraisers attracting an outpouring of cash for affected families and businesses.

Full legalization or decriminalization won't turn back the clock on the fires, but it could make rebuilding a much more straightforward, and socially acceptable, task.