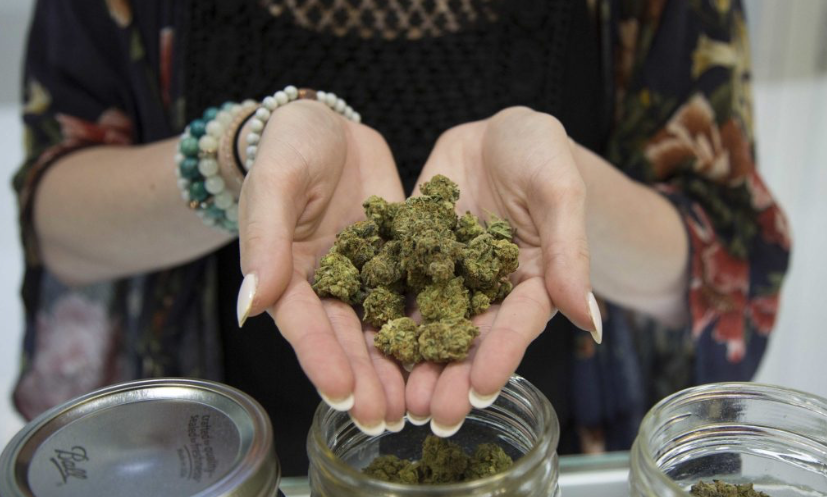 420 FILE--The vibe was communal and optimistic at the large Victorian-style house south of downtown Los Angeles, where several dozen activists and stakeholders in LA’s cannabis equity program met last month to discuss what they want the program to be and how it can help those impacted by the war on drugs start their businesses.

The setting was a monthly meeting of the Equity First Alliance, a national nonprofit fighting for racial equity in the cannabis industry. Women, men and some children sitting on chairs and standing in the living room could have turned the gathering into a gripe session about speed bumps that the city of Los Angeles has placed on the road to obtaining equity cannabis business licenses.

Cat Packer, executive director of LA’s Department of Cannabis Regulation (DCR), which administers the commercial cannabis licensing and regulatory program established by the city, admitted that the city’s social-equity efforts have been slow to get off the ground.

“Right now Oakland is the standard for social equity,” Packer said. “We need to address the work left on the table with Prop. 64. We have to track where the money goes for this, both state and local. We need transparency about how it’s managed. And we need to make sure that LAPD isn’t using money for equity to start Drug War 2.0.”

In 2016, California voters approved Proposition 64, which legalized recreational marijuana for adults and provided amnesty for weed-related crimes. That proposition also called for “reducing barriers to entry into the legal, regulated market.” One way to knock down those barriers is through cannabis social-equity programs, which aim to help people who either lack the capital and experience to start a cannabis business or have been blocked from doing so due to past pot-crime convictions.

Sacramento and San Francisco also have cannabis social-equity programs. But these programs, most of which were set up before recreational marijuana became legal in January 2018, didn’t have funding sources until September 2018, when then-Governor Jerry Brown signed Senate Bill 1294 into law. That bill authorized cities with equity programs to apply for funding from a $10 million appropriation approved in the state’s 2018 budget— money could go toward loans, grants and technical assistance to would-be cannabis entrepreneurs. Spread across all cities with equity programs, it’s not a lot of money, advocates say, and none of it has been distributed.

And as for state guidance in setting up equity, cities have been on their own. Model equity ordinances, mandated by SB 1294, were published on the California Bureau of Cannabis Control’s website on July 1.

LA’s program has also been criticized as being too complicated. It has three tiers for applicants. Those on the first tier get priority processing of licenses over other tiers, and over general license applicants. Tier 1 social-equity applicants must demonstrate that they have a combination of low income (80 percent or below the area median income), and a prior cannabis conviction. Or they could have low income and have resided in a ZIP code heavily impacted by cannabis convictions. Either of those scenarios would give the equity applicant the ability to obtain a license before a general applicant. It also gives them the ability to team up with a partner, ostensibly one with experience in the industry and/or startup money.

The largely supportive crowd at the Equity First Alliance meeting appeared to accept Packer’s claim that she has been stymied by a lack of funding from City Hall. Her department currently has 21 staff members, according to a spokesperson for DCR, and they’ve been allocated 37 positions. When she started in August 2017, however, Packer had only one other staffer.

Felicia Carbajal, a longtime cannabis advocate and member of the Equity First Alliance, a national coalition of cannabis and social justice organizations, also spoke at the meeting and was blunter about the problems with L.A.’s equity program: “The money coming in [for social equity] is a drop in the bucket. It’s a Happy Meal.”

Even getting the city to relinquish $3 million per year for three years for business licensing and compliance assistance was a struggle, and that money wasn’t approved until April. Carbajal and other advocates slammed the city when word got out in March that part of the budget line item funded by anticipated tax revenues from cannabis sales had been used instead to fund Los Angeles Police Department overtime spent on cracking down on unlicensed pot dispensaries in the city.

A DCR spokesperson, Sylvia Robledo, wrote in an email that the money for business licensing and compliance wouldn’t be available until cannabis business tax revenue exceeded $30 million. “The LAPD received $5 million . . .  for sworn overtime and DCR received $1.5 million for the Social Equity Program. The $1.5 million was approved in April 2019 and the funding rolled over to DCR’s current year budget,” Robledo wrote.

Technicalities about how much money is available, and when, and from which source, are frustrating to activists, as are the complaints from equity applicants who said they found the entire process of applying for a license bewildering. At the South Los Angeles meeting, Oscar Aguayo, president of small business developer Conaxion, pledged to help applicants navigate the process, free of charge.

“If people don’t have access to tech assistance and banking, then social equity is all theoretical,” Carbajal told Capital & Main, adding that applicants have found the city’s procedures and forms baffling and have been confused about the qualifications for the program. Carbajal and other advocates have warned that so far there’s been no help in protecting equity applicants from “predatory” companies that are looking to partner with them just to jump ahead of the line to get a license to distribute cannabis products, rather than to help applicants with capital and business expertise as the program was ostensibly set up to facilitate.

“When L.A. created the division, there was no vision, no passion and no investment in development of the department,” said Armando Gudino, the California Policy Manager at the L.A. office of the Drug Policy Alliance, an organization fighting against the war on drugs. “They put all the chips on Cat Packer to navigate this.”

Gudino speculated that City Hall’s slowness on adequately funding and staffing the program may have been due to deference to the city’s legal dispensaries, many of which have been around since California legalized medical marijuana in 1996. In the L.A. structure, those who qualify for the equity program are given priority, while those who had long-held licenses to sell medical marijuana and may want to also get a license to sell recreational marijuana, had to go to the back of the line. Medical cannabis, Gudino said, “turned into a powerful lobby when they saw new upstarts threatening their business.”

In 2015, with her partner Elizabeth Ostermann, Christina Lake founded Loki Lotion, a line of pain-management topical products infused with cannabis-based extracts. Lake thought the equity program would allow her and Ostermann to get a license to distribute products on their own and to even expand. Because her products were already on the shelves of some dispensaries, she would be both an “incubator” and an equity applicant. That’s because she qualified for equity due to her low income and status as indigenous, which is not typical of most applicants.

Lake claimed she partnered with a company that she didn’t know much about, but which supposedly had the skill and startup funds to make Loki Lotion successful. Lake told Capital & Main that the other company wasted time, offered little seed money, and provided no technical assistance. As a consequence of the difficulty of eventually getting out of the agreement, Lake said, she missed the window for getting a temporary license last year.

“The Department of Cannabis Regulation said, ‘You have to handle this problem [with the partner] yourselves,’” Lake said. “When you are attached to a predator, how do you get help? The city was supposed to help equity applicants succeed. I feel more oppressed than ever. You should never pass a law without funding it.” Lake said she’s going back to her original plan and get her products back on the shelves of local distributors (she had to remove them in order to get her own license).

In an email Robledo of the DCR responded to Lake’s comments, writing that DCR is strictly a regulatory agency. “Therefore, it does not provide any legal assistance to applicants and/or their incubating partners.” Robledo added that legal assistance is one service that could be offered with some of the recently allocated $3 million to fund business and licensing assistance.

In a separate email Robledo said that the department is raising applicants’ awareness of predatory practices and behaviors through a website FAQ section, as well as five technical assistance workshops in various locations throughout the city and through free one-on-one clinics.

While no equity licenses have been issued in Los Angeles — they will be handed out starting in early September — Oakland’s cannabis equity assistance program issued its first equity dispensary permit in January 2018. Lemar Key learned about the equity program in 2017 while he was attending the University of California, Berkeley, and began looking for a partner to take advantage of the program once licenses were issued. Key grew up in a neighborhood with a disproportionate number of drug-related arrests, which is one qualification for receiving for an equity license.

He quickly found a business partner who agreed to provide capital and office space in exchange for 50 percent ownership in the company, Nimbus, a business-to-business marketplace that lets companies buy directly from growers. Key dropped out of school to launch his company as soon as he got his license through Oakland’s equity program, as well as a no-interest loan from the city. “Without the equity program, it would have taken much more resources,” Key said. “I haven’t heard any complaints from any other equity applicants.”

Greg Minor, assistant to the City Administrator for the city of Oakland, is reluctant to take a victory lap about its equity program. Instead he pointed out that in a newly regulated industry, there will be roadblocks.

“Equity programs are not created in a vacuum. Startups go through the problems that startups in any industry experience. Plus, they are establishing business in a newly legal market. We’re all playing catchup.”

Minor added that all cities with equity programs need more money from the state, including for no-interest loans, and more technical assistance to help would-be entrepreneurs navigate everything from special building permits to simply filling out applications. And they need help with banking. Because cannabis is still a Schedule 1 drug, most banks are reluctant to do business with cannabis companies, even in states where it’s legal. “You have to establish a banking account indirectly,” Minor said, adding that business owners sometimes must use their personal accounts for company banking.

At the Los Angeles gathering, Cat Packer was upbeat with the audience of potential equity licensees, but realistic about the challenges ahead and urged everyone to come with her and “grab 20 people and bring them to the next City Hall meeting” to make their voices heard. She also reiterated the point of the program. “The opposite of the drug war is equity.”

(Larry Buhl writes for Capital & Main … where this perspective was first posted.)