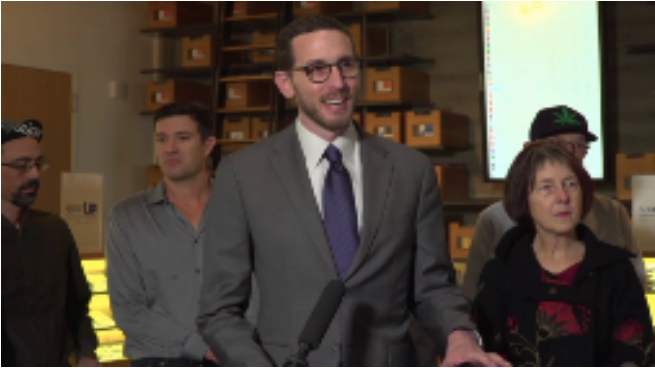 420 FILE--Joined by co-sponsor Sen. Nancy Skinner (Berkeley), Senator Scott Wiener (San Francisco) announced he will re-introduce his bill to protect cannabis compassion programs in California at a press conference at the SPARC dispensary in SF.

A coalition of caregivers, veterans groups, and other patient advocates including Cal NORML worked with Wiener's office last year to pass SB 829 through the state legislature. However, Governor Brown callously vetoed the measure. This year, Gavin Newsom will be Governor and it's hoped our new governor will be more compassionate.

Ever since the passage of Prop. 215 in 1996, it has been the practice of many providers to donate a portion of their product free of charge to needy patients through charitable compassion programs. These programs are now threatened by Prop. 64, which requires that all donations be taxed at the same rate as if they were sold. Thus every pound of cannabis which is donated free of charge to legal patients is liable for nearly $1000 in state taxes.

Wiener will refile his bill on Monday, December 3 when the Legislature re-convenes. At that point a new bill number will be assigned.

Protecting Compassion Programs is one of Cal NORML's goals for 2019. Read more about Cal NORML and our future goals.