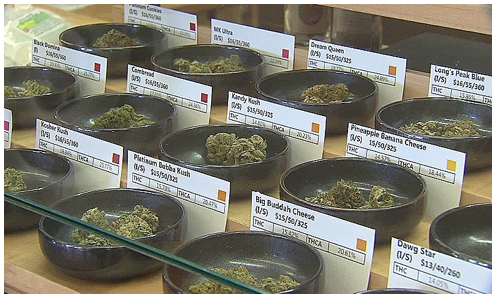 420 FILE--California is days away from launching a legal marketplace for adults to buy and sell recreational marijuana. On Jan. 1, the state will carry through on a vision voters endorsed by passing Proposition 64 last year.

Yet as legal cannabis moves from campaign pitch to reality—amid lots of lobbying by industry groups along the way—some details of the plan have changed. State regulators approved the official rules last month, and will update them again in about a year.

“Some of the things that were touted (during the Prop. 64 campaign) definitely have been changed or reneged,” said Andrew Acosta, a political consultant who worked on the campaign against the initiative.

Here are a few ways the new rules differ from what voters may have expected:

Campaign literature supporting Prop. 64 last year said the initiative “protects small farmers, so California’s marijuana industry isn’t overrun by mega-corporations.” The measure was crafted to give small-scale growers a five-year advantage by forbidding licenses for pot farms bigger than one acre until 2023.

Now many of the mom and pop growers who were supposed to benefit are crying foul. They say the new rules won’t protect them because there’s no limit on the number of small-farm licenses a business can get.

“A grower can get 10 licenses and effectively be a large grower. That seems like a loophole,” said Hezekiah Allen, executive director of the California Growers Association, which represents more than 1,000 marijuana businesses, including many small farms in the northern reaches of the state.

Legislators from the north coast went even further, with state Sen. Mike McGuire calling the current rules “a broken promise.” A Democrat from Healdsburg, McGuire issued a statement saying that without a cap on the number of licenses, large corporations will “crush the livelihood of small family farmers.”

A spokesman for the Department of Food and Agriculture, which regulates cannabis farms under Prop. 64, said the rules don’t include a cap on small licenses “because Proposition 64 did not provide authority to impose such a limit.”

“However,” spokesman Jay Van Rein said by email, “local jurisdictions may impose that type of limit on their own if it meets the needs of their constituents.”

Tap-an-app delivery to your doorstep 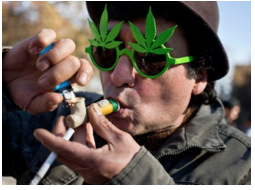 Backers of Prop. 64 said emphatically last year that the initiative was not intended to allow on-demand delivery of recreational pot, a wildly popular service among medicinal users that allows them to order cannabis products from an online menu and have drivers deliver the drugs to their door. The Prop. 64 campaign even made the argument before a judge, saying the initiative would not allow customers to place orders online—only “in a brick and mortar establishment.”

They were trying to beat back opposition from law enforcement groups who argued that internet-based home delivery would make it too easy for teenagers to get marijuana.

Now it turns out California will allow on-demand delivery of recreational cannabis, including for orders placed online.

“That was something we have heard a lot about from the very beginning, about how people wanted to be able to deliver to people’s homes,” said Alex Traverso, a spokesman for the Bureau of Cannabis Control, which held public meetings around the state in the process of drafting the recreational marijuana rules.

“After hearing the reaction from people in the industry, from patients, from people who came to summits and town halls, it became clear that it was something we needed to look at.”

Prop. 64 spokesman Jason Kinney said many local governments wanted rules that would allow for on-demand delivery. Some cities wanted to prohibit cannabis storefronts, but allow businesses to deliver it to customers who order online.

“We give them the authority to decide what takes place in their jurisdiction,” Kinney said, noting that online delivery services must have a distribution premises licensed by local officials. “We don’t view it as being in conflict” with arguments made in the Prop. 64 campaign.

Promises that Prop. 64 would ban pot ads aimed at kids permeated the campaign last year. The measure does restrict how licensed marijuana businesses can advertise, forbidding them from mounting billboards alongside interstate highways, as well as near schools and playgrounds.

But it turns out that the language of the law doesn’t cover all businesses that have a commercial interest in marijuana. It leaves out companies—like the popular website Weedmaps—that promote cannabis businesses but don’t directly sell marijuana themselves. That’s because the law only restricts advertising by licensed marijuana businesses, and a web platform that doesn’t directly sell pot doesn’t need a state license.

Weedmaps billboards—sporting phrases like “High California, “High Hollywood” and “High Sactown”—have popped up around the state. Though it’s unclear if any of the company’s California billboards are located where other cannabis businesses will soon be banned from advertising, a bipartisan team of state legislators thinks the state should prevent that possibility.

“They are clearly promoting use of cannabis and advertising cannabis, and in my view, they should be subject to the same rules and regulations as licensees,” said Democratic Assemblyman Rob Bonta of Alameda. He’s one of five lawmakers who signed a letter asking state regulators to find a way to limit ads by marijuana-focused web platforms.

“Maybe we thought at the time when we adopted Prop. 64 that licensees was the appropriate universe to cover, but certainly Weedmaps is driving a truck through a loophole that should be closed,” Bonta said.

Kinney, the Prop. 64 spokesman, is also a lobbyist whose firm represents Weedmaps. The company spent at least $850,000 to help pass Prop. 64 last year and another $172,000 lobbying this year on its implementation. He said he couldn’t comment on how Weedmaps will respond to lawmakers’ demand to limit advertising. But he noted that regulating advertising by a media platform is a “slippery slope.”

“I assume we’ll be actively part of a discussion next year,” he said.

Laurel Rosenhall covers California politics for CalMatters, with a focus on power and personalities in the statehouse. Her weekly news analyses explain political dynamics in the Capitol and examine how money, advocacy and relationships shape the decisions that affect Californians. This piece originated at CalMatters.)