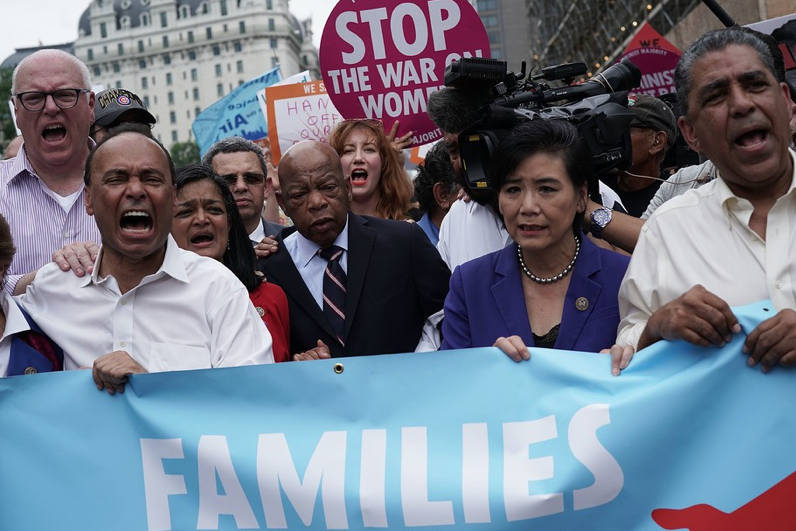 CHATTERBOX--A group of House Democrats, including legendary civil rights hero John Lewis of Georgia, risked arrest yesterday in an act of civil disobedience after blocking off streets around the White House and the entrance of the Customs and Border Protection (CBP) headquarters, in protest of the Trump administration’s horrific policy tearing kids from the arms of migrant parents.

Congress members Judy Chu of California, Al Green of Louisiana, Raúl Grijalva of Arizona, Luis Gutiérrez of Illinois, Joe Crowley of New York, Adriano Espaillat of New York, Jimmy Gomez of California, Pramila Jayapal of Washington state, Jan Schakowsky of Illinois and Lewis have all signed a letter calling for the defunding of family separation, but this barbaric practice also called for outrage:

The members of Congress—as well as dozens of people including actor John Cusack who joined them—marched to the U.S. Customs and Border Protection building in Washington, D.C., chanting, among other things, “Bring our babies back” before seating themselves on the steps of the CBP building.

The group was prepared to be arrested in the name of vulnerable kids and their parents, but ultimately none were. “DHS will arrest children,” Chu tweeted, “but when Members of Congress commit civil disobedience they watched silently. Shame! So we are taking our protest directly to Donald Trump. Next stop the White House.”

According to NY1's Jeevan Vittal, Rep. Crowley collapsed at the end of the protest, feeling “faint due to possible heat exhaustion.” He later tweeted, “thanks for everyone's concern—doing fine now. Wish I could say the same for the children and parents at the border.”

(Gabe Otiz writes for Daily Kos… where this report originated.)