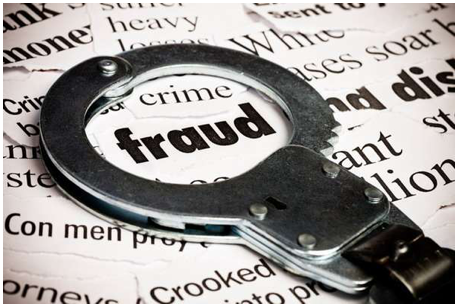 DONE WATCH-My name is Lawrence Bouett.  I am a stakeholder in the Historic Cultural Neighborhood Council (HCNC) by virtue of the fact that I am an officer in a Solano Canyon-based non-profit corporation called 1866.  My great-great grandfather, Francisco Solano, purchased 87 acres of land in the Stone Quarry Hills from the City of Los Angeles in 1866.  This land was located in and around what was known as Solano Ravine, and with his family, Francisco Solano founded what is now the community of Solano Canyon.  My grandfather was born in Solano Canyon and was one of the first students in the original Solano Avenue Elementary School.  My father grew up in a house on Solano Avenue, and he, too, was a student in the original elementary school, the location of which is now the Solano Canyon Community Garden.

The purpose of this letter is to voice my disapproval of, and vigorous opposition to, the foolhardy decision on the part of the Department of Neighborhood Empowerment (DONE) to forge recklessly ahead with the ill-conceived and entirely inappropriate application of the Historic Cultural North Neighborhood Council Formation Committee (HCNNCFC) to subdivide the existing Historic Cultural Neighborhood Council (HCNC).  This incomplete, fraudulent application has, unfortunately, been granted special concessions that contravene existing protocol and are blatantly discriminatory to the neighborhoods of the HCNC, and which are likely in violation of the regulations of the City of Los Angeles under which DONE operates.  As such, individual members of DONE have likely opened themselves up to charges as civil servants under civil procedure for the City for violation of due process.

Standard Procedure for formation of a Neighborhood Council was not followed.

The effect of this failure is discriminatory to the stakeholders of the HCNC, because they have not been afforded due process.  It appears that the decision to contravene existing procedure was made arbitrarily by DONE, which further exacerbates the discriminatory effect of the decision.  Certain requirements must be met:

The fact is that the deadline for submission of the subdivision application was January 15, 2018.  While the application was so submitted, it contained only 116 apparently “valid” signatures, none of which has subsequently been verified.

For reasons beyond understanding, DONE apparently requested and accepted additional signatures from Formation Committee adding approximately 166 signatures two weeks after the Department’s deadline.  None of these signatures have been verified, and it is clear (from the names) that the signatures are overwhelmingly from Chinatown; there are virtually no signatures from the other HCNC neighborhoods.

This fact alone demonstrates the abject failure on the part of the Formation Committee to adhere to the requirement for community outreach, and should be sufficient of and by itself to result in the wholesale rejection of the subdivision application.

In the case of the proposed subdivision of HCNC, there are at least two major conflicts of interest that must be acknowledged:

Steven Chow is a field deputy for Congressman Jimmy Gomez, and is, therefore, a public servant.  The participation of Steven Chow in presenting false data and actively participating in promoting the subdivision against the communities he represents compromises the public trust and jeopardizes the integrity of Rep. Gomez within the HCNC communities.

The primary signatory of the subdivision application is Angelica Lopez Moyes.  Ms. Moyes has a personal relationship with Mr. Tad Yenewine, the Chair of the Echo Park Neighborhood Council (EPNC).  The Chair co-erced the members of EPNC to endorse the subdivision application despite the fact that the HCNC was unaware that the subdivision was happening.  Fortunately and as a testament to the rest of the EPNC Board, the endorsement letter was rescinded after multiple objections and the circumstances behind the endorsement came to light; it is unconscionable that the Chair of an adjacent NC is actively participating in an action to subdivide a neighboring NC.

Such outreach has clearly not been done in the case of the subject subdivision application.

A look at the signature pages that have been submitted (whether the original 128 names or the 166 names that were subsequently submitted after the deadline) will show that the names are about 97% Chinese and the subdivision application is a near-unanimous, Chinatown-led exercise which should be rejected on the basis that community outreach was simply not done.

The deadline for submission of the subdivision application was January 15, 2018.  A Public Records Request was made on 24 January 2018 to inquire about the status of the application.  The response at that time was that “... all the paperwork is in.”

The additional signatures were received January 30th, 2 weeks after the deadline.  What is striking is that the signatures are predominantly in the same handwriting.  They are by definition, fraudulent and must be discounted and uniformly rejected.  The subdivision application is incomplete, violated existing regulations, and violated due process, and must be rejected.

Chinatown has expressed its desire to form its own Neighborhood Council.

A recent publication entitled “CHINATOWN AS A NEIGHBORHOOD COUNCIL”, printed both in English and Chinese, makes it clear that the ultimate goal of the current subdivision application is to form a separate NC exclusively for Chinatown: 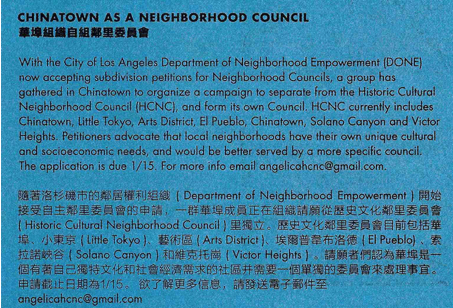 The relevant statement is:  “... a group has gathered in Chinatown to organize a campaign to separate from the Historical Cultural Neighborhood Council (HCNC) and form its own Council ... for more info email [email protected]”

‘[email protected]’ is the aforementioned Angelica Lopez Moyes, whose conflict of interest has already been documented above.  If Chinatown wants to be its own NC — as is made clear from the above publication — then why are they trying to divide and disrupt the other communities that are currently in the HCNC?  This is yet another reason to reject this ill-conceived subdivision application.

For all that has been made by the Chinatown representatives on the HCNC of the need for translation, the subdivision application itself was not translated.

Much has been made, especially on the part of the residents of Chinatown through its representatives on the HCNC, of the need for written materials always to be translated so that HCNC stakeholders may read documents in their own languages; yet the subdivision application was not translated from English.  Despite the protestations in favor of translation, and since the subdivision application was not translated, it seems odd that 97% of the signatures that were submitted, including the 148 fraudulent signatures that were obtained after the deadline, were from stakeholders with Chinese names.  Experience would dictate that not all of the Chinese signatories were fluent in English, which further begs the question of whether they were aware of what they were signing.

The inexplicable decision on the part of DONE to advance this incomplete and improperly-submitted, even fraudulent subdivision application to BONC for approval (the next step in the process) potentially exposes members of both organizations to civil penalties for the failure to adhere to existing practices and procedures and reflects poorly on the ability of both of these City-charted organizations to deal fairly and equitably with the citizens of Los Angeles, whom they serve.

The subdivision application must be rejected now in its entirely, and must never be submitted to BONC for further consideration.  The February 9, 2018 letters that were written to the Historic Cultural Neighborhood Council (HCNC) and the Historic Cultural North Neighborhood Council (NCNNC) Formation Committee and signed by Mike Fong, Director of Policy and Government Relations, Department of Neighborhood Empowerment (DONE) were improperly executed and must be voided.

If this is not done expeditiously, then it may be necessary for the stakeholders of the HCNC who were defrauded and denied due process, to seek the remedy of legal action to ensure that due process is followed for all citizens, and that special consideration only for a select few, which is unacceptable, is not the result.

(Lawrence Bouett is the great-great grandson of Francisco Solano and an HCNC stakeholder. This advertorial was paid for by the DONE Watch Coalition, founded by Laura Velkei and supported by a coalition of Los Angeles neighborhood council activists.)