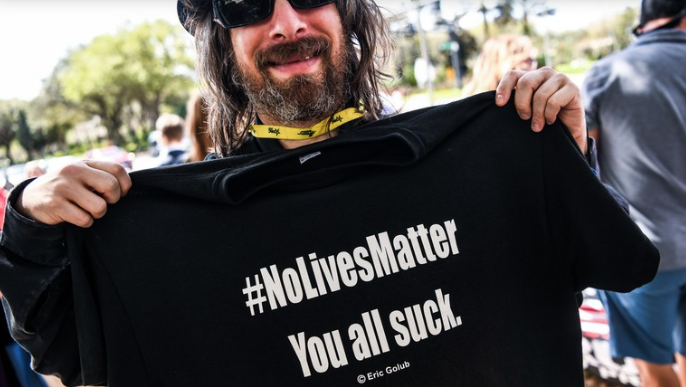 VOICES - With an ugly, abject lack of empathy constituting what now feels like another deadly epidemic  - of not illness but ill will -

idiot jackals in the fuck-your-feelings crowd keep emerging from the tawdry woodwork to voice their fiery contempt for anyone who, gasp, disagrees with them. The reality of a country so bitterly divided, with millions of people so fearful or angry or unreasoning they cannot view disparate others as fully human, is deeply disheartening but alas unsurprising.

"When you build a political movement whose emotional core is transgression and cruelty," notes Chris Hayes, "ultimately no one is safe" - especially, he warns, if and when those who created that nihilistic norm come to power. And so the noise, ranging from vicious to bumptious to heedlessly dangerous. On Tuesday, one Thomas Patrick Connally, Jr., 56, was charged with making threats against a federal official after he was evidently so enraged by neighborly government advice to get vaccinated he sent emails to Anthony Fauci saying he would break every bone in his "disgusting elf skull" and sew his scalp onto a rat because he is "a sickening, compromised satanic freemason criminal" and a "disgusting piece of elf garbage." He also said Fauci's wife and daughters would be shot "in their disgusting pig snouts while you watch" and NIH Director Francis Collins would get "6 mandatory shots in your worthless satanist faggot skull, you sick little fuck." No elf references, though.

Sadly, the week's lunatic abuse kept flowing. Literally as Michael Fanone was testifying to the House about the Jan. 6 insurrection along with fellow Capitol officers Aquilino Gonell, Harry Dunn and  Daniel Hodges, he got a deranged voice message calling him "a punk faggot (and) lying fuck!" "Too bad they didn't beat the shit out of you more!" it added. "You're a piece of shit!" The caller was only slightly more demented than the "braying chorus" of Fox News cretins attacking the other stalwart cops who defended lawmakers, even Fox-watching Republicans, from the mob. Certified worst human being and hypocrite supreme Tucker Carlson smirked and snickered through a clip of Fanone citing his "psychological trauma" to note there mighta been some crimes committed on Jan. 6 "but compared to what?" and “You just heard him call for some sort of political inquisition" and anyway these guys were lying. His fellow swamp-creature Laura Ingraham went yet lower, sneering, "God save us from these third-rate theatrics" before launching into a faux-awards ceremony for their "performances...Now, the award for best use of exaggeration in a supporting role. The winner is Aquilino Gonell." They keep spewing, but the cops, made of tougher stuff, keep clapping back. "The facts are the facts," insists Fanone, who says he "couldn't care less" about their vitriol except it has "real-life consequences" when their audience "thinks it's real." Dunn likewise insists on still speaking up. "I'm allowed to have a political opinion," he said. "This is my country too."

The week's sanctimonious hate-fest also included attacks on Olympic gymnast Simone Biles after she dropped out of competition citing mental health issues. (Sunisa Lee, who took her place and was the first Hmong athlete at the Games, won gold anyway, which was very cool.) Biles was met with a blizzard of scorn from the risible likes of right-winger Charlie Kirk, who called her "weak" and "selfish" - chutzpah thy name is - and TV washoutPiers Morgan, who chided her as "a joke. Kids need strong role models, not this nonsense." This nonsense, this arrogant bullshit from white, pudgy, middle-aged, blundering men, was aimed at a black female athlete who at 24 has survived growing up in the foster care system and being sexually assaulted at the hands of Larry Nassar to become the best gymnast in the world and perhaps of all time, competing globally - once while passing a kidney stone - winning four gold medals in 2016, mentoring younger athletes, and quietly transforming her sport. The best retort to these presumptuous ignoramuses is McSweeney's "Decision Tree" inquiring, "Are you allowed to criticize Simone Biles?" On one side, it asks, Are you a gymnast ? Have you competed on international stages? Have you revolutionized your sport including but not limited to inventing four mind-bogglingly complex moves named after you, etc. On the other, it essentially answers no, I'm just a pasty, conservative sad sack griping about "courage" who expects black athletes to put their minds and bodies at risk purely for my entertainment - I'm just some dipshit. Ergo, it concludes, "Shut the fuck up."

Ditto to GOP imbeciles in the House throwing masks and tantrums because, after 611,000 deaths and a surge in COVID cases among the stubbornly unvaccinated, lawmakers are being asked to wear a piece of cloth on their face. In response, the usual suspects - MTG on Pelosi's "hysterical unprecedented abuse of power!" - babbled as Kevin 'Mask Hurt Facey' McCarthy declared the mask mandate a decision based not on science but commie conjuring. Cue Pelosi muttering "He's such a moron," and the moron further beclowning himself by insisting the new guidance is based on "an unpublished report from India that didn't even pass per (sic) review": "I regret to inform you the Minority leader is reacting well to being called a moron." Blow-back was fierce. One infectious disease physician: "You're literally contributing to killing Americans. We don't need the work - please stop." John Pavlovitz has written about "the sadness" of sharing a country with Trump supporters, with "that kind of moral inversion and cruelty," especially now, with all we know. "It's the sickness that the America we love has shown itself afflicted with," he wrote, "the bigotry and discord and hatred set upon our chests." As with all grief, he advises, "The only real path is forward" - to move on, celebrate life, practice empathy, seek truth: "You learn to walk again, even if it is with a limp. You begin the laborious act of living in direct opposition to your grief." Still, that renewal can come  hard to bone-and-soul-weary nurses who for too long have tended the ill and dying, mourned the needless loss, been haunted by choosing who gets the oxygen, or lost, by now, "their last shred of faith in humanity." One devastating plea: "What will it take for people to just give a fuck about another human being?"