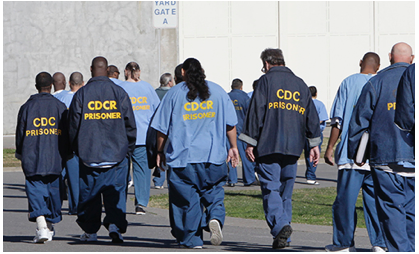 VOICES--"If you're not catching flak you know you are not over the target" is a saying which apparently originated from WWII pilots, who could tell they were over the target if they could see and feel the antiaircraft fire.

The ADDA appears to be right over the target on Prop 57 releases judging by the response by the California Department of Corrections & Rehabilitation (CDCR) to comments by ADDA President Michele Hanisee in a recent KNBC investigative story by Eric Leonard, Inmates with Violent Pasts Paroled Under Prop. 57.  The comment that stoked their ire: "The law was written in a very vague manner. And it was very clear they intended to release violent offenders by re-describing them."

CDCR responded with an overwrought broadside that this comment was "a cynical attempt to scare and mislead the public by an interest group more focused on flouting the will of the voters - who passed Proposition 57 by a nearly 2-1 margin in 2016 - than improving our criminal justice system."

The felon highlighted in the KNBC story was convicted murderer, Alfredo "Freddy" Casillas.  Casillas was sentenced in 1988, to 16 years to life for murder with the use of a weapon. In September of 1992, while still serving his murder sentence, Casillas slashed another inmate three times with a prison-made weapon. Then, in May of 1994, Casillas attacked another inmate with a spear/arrow type weapon, hitting the other inmate in the head. Casillas was sentenced to eight years for these assaults, to run consecutive to his murder sentence. The Parole Board granted Casillas parole on his murder in January of 2015, but Casillas was not released as he still had to serve the consecutive eight years for the assaults. In January of 2018, although Casillas had only served three years of this eight year term, the Parole Board released Casillas early, after determining that he "did not pose an unreasonable risk of violence to the community if released."

CDCR can call names all they want. It is they who are "flouting the will of the voters" by approving early release for inmates who are serving time for violent assaults. We will cynically disagree that Casillas was the "non-violent" felon the public had in mind when they voted for Prop 57.

Trials and sentencing hearings are held in open court.  Victims and the accused have a right to be heard before the judge imposes a sentence.  Any member of the public or media may attend and watch. Thanks to Prop 57, unaccountable Parole Board members convene outside the public view and make unreviewable decisions, undercutting the sentences imposed by a judge in open court.

In the coming weeks, we will spotlight a few more "non-violent" offenders who are being released as a result of Prop. 57. We have highlighted these decisions in several blogs.

Based upon their comments, it is clear that the Board of Parole and CDCR are frightened by any critique of their release decisions.  Nevertheless, we will continue to inform the public about any inmates released early under Prop 57 who do not appear to meet the public's concept of "nonviolent."