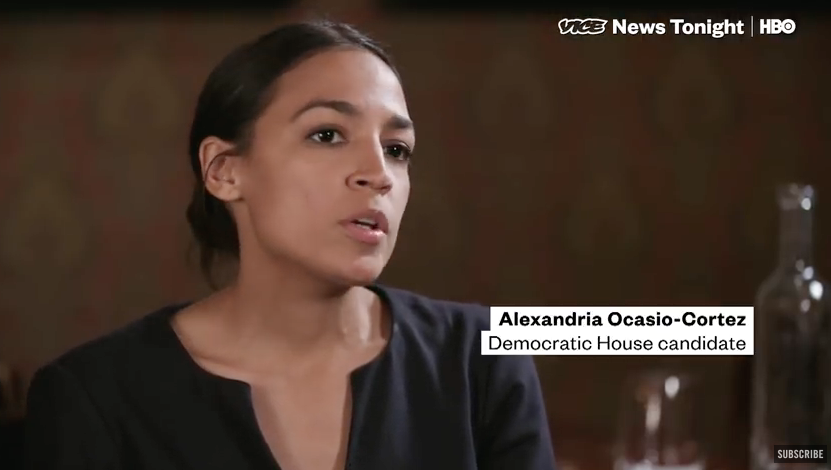 GUEST COMMENTARY--Now that Alexandria Ocasio-Cortez, a 28-year-old member of Democratic Socialists of America (DSA), has defeated powerful Congressman Joe Crowley in the Democratic primary in New York, the word “socialism” is in the news. But few Americans know what it actually means.

Interviewed by Stephen Colbert on The Late Show on Thursday, Ocasio-Cortez explained:

I believe that in a modern, moral, and wealthy society, no person in America should be too poor to live. What that means to me is health care as a human right, it means that every child no matter where you are born should have access to a college or trade-school education if they so choose it. I think that no person should be homeless if we have public structures or public policy to allow for people to have homes and food and lead a dignified life in the United States.

The day after Ocasio-Cortez’s victory, CBS News’ Nancy Cordes asked House Minority Leader Nancy Pelosi if democratic socialism is “ascendant” in the Democratic Party. Pelosi responded with a firm “no.”

If Ocasio-Cortez wins her race for a seat in Congress from New York City in November (which she almost surely will), she will be one of at least 35 DSA members serving in public office around the country, including school board and city council members, and state legislators in Iowa, Ohio, Pennsylvania, New York, Tennessee, Montana, Michigan, Virginia, Minnesota, Massachusetts, and Connecticut. If all the DSA members currently running for office win their elections in November, that figure will grow to more than 100 officeholders, all of them Democrats. There are also some socialists who hold public office—such as Seattle City Council member Kshama Sawant—who are not affiliated with DSA. And of course, there’s Senator Bernie Sanders, a democratic socialist who calls himself an independent but who caucuses with the Democrats and sought the Democratic Party’s nomination for president in 2016.

DSA, which was languishing with only 6,000 members in 2015, now boasts 43,000 members and 220 local chapters, with membership and local affiliates increasing steadily in red and blue states alike. But the number of Americans who now view socialism as a legitimate idea is much larger than the membership of DSA. A YouGov poll released last November found that only 59 percent of Americans had a favorable view of capitalism. Among those under 30, only 42 percent said they would prefer to live in a capitalist society. In contrast, 44 percent said they preferred a socialist society.

Rather than ignore the obvious, Pelosi and other Democratic Party leaders should welcome democratic socialists into the party’s big tent. Many of the grassroots activists who are re-energizing the party to take back the House in November—and to win races for governor and state legislatures throughout the country—are progressives and democratic socialists.

Other socialists included writer Upton Sinclair (whose 1906 novel The Jungle, about the harsh conditions among Chicago’s meatpacking workers, led to the enactment of the first consumer protection law, the Meat Inspection Act); muckraking journalist Lincoln Steffens (who exposed municipal corruption in his articles in McClure’s magazine, collected in The Shame of the Cities); Lewis Hine, whose photographs exposed the brutal conditions of child labor to an outraged public; scientist Albert Einstein; Walter Reuther, who built the United Auto Workers union; Norman Thomas, a Protestant minister, the leader of the Socialist Party from the 1930s through the 1950s, and a six-time presidential candidate; civil rights leaders A. Philip Randolph, Bayard Rustin, and Martin Luther King Jr.; Michael Harrington, whose 1962 book The Other Americainspired Presidents John F. Kennedy and Lyndon Johnson to wage a war on poverty; feminist Gloria Steinem; and former California Representative Ron Dellums.

In the early 1900s, socialists led the movements for women’s suffrage, child labor laws, consumer protection laws, and the progressive income tax. In 1912, at the Socialist Party’s high point, about 1,200 party members held public office in 340 cities, including 79 mayors in cities such as Milwaukee, Buffalo, Minneapolis, Reading, and Schenectady. These local leaders, whose ranks included working-class labor union members and middle-class radicals such as teachers, clergy, and lawyers, worked alongside progressive reformers to improve living and working conditions in the nation’s burgeoning cities. They pushed for public ownership of utilities and transportation facilities; the expansion of parks, libraries, playgrounds, and other services; and a friendlier attitude toward unions, especially in time of strikes. In Milwaukee, where Socialists led the city government for several decades, their attention to good management and infrastructure earned them the label “sewer socialists.”

In 1916, Victor Berger, a socialist congressman from Milwaukee, sponsored the first bill to create “old age pensions.” The bill didn’t get very far, but two decades later, in the midst of the Depression, President Franklin D. Roosevelt persuaded Congress to enact Social Security. Even then, some critics denounced it as un-American. But today, most Americans, even conservatives, believe that Social Security is a good idea. What had once seemed radical has become common sense.

Much of FDR’s other New Deal legislation—the minimum wage, workers’ right to form unions, and public works programs to create jobs for the unemployed—was first espoused by American socialists.

Socialists were in the forefront of the civil rights movement from the founding of the NAACP in 1909 through the Voting Rights Act of 1965. Socialists have long pushed for a universal health insurance plan, which helped create the momentum for stepping-stone measures such as Medicare and Medicaid in the 1960s and Obamacare today.

Martin Luther King Jr. believed that America needed a “radical redistribution of economic and political power.” In October 1964, he called for a “gigantic Marshall Plan” for the poor—black and white. Two months later, accepting the Nobel Peace Prize in Oslo, he observed that the United States could learn much from Scandinavian “democratic socialism.” In fact, he told his staff, “There must be a better distribution of wealth, and maybe America must move toward a democratic socialism.”

During his 2016 campaign for president, Sanders said that America needs a “grassroots political revolution.” But Sanders—like Ocasio-Cortez—is actually a reformer, not a revolutionary. In the United States, democratic socialism is akin to what most people around the world call “social democracy,” which seeks to make capitalism more humane.

Sounds anti-business? Forbesmagazine ranks the Netherlands and Sweden as the third and fourth best countries for business. Denmark was number seven. The United States ranked number 12.

Socialists believe in private enterprise but think it should be subject to rules that guarantee businesses act responsibly. Banks shouldn’t engage in reckless predatory lending. Energy corporations shouldn't endanger the planet and public health by emitting too much pollution. Companies should be required to guarantee that consumer products (like cars and toys) are safe, to pay decent wages, and to provide safe workplaces.

Democratic socialism means reducing the political influence of the super-rich and big corporations, increasing taxes of the wealthy to help pay for expanded public services, and reducing barriers to voting.

In addition, 61 percent approve of labor unions; 60 percent believe “it is the federal government’s responsibility to make sure all Americans have health-care coverage”; 63 percent favor making four-year public colleges and universities tuition-free; 59 percent favor free early-childhood education; 54 percent favor raising the minimum wage to $15 an hour; 72 percent think it is a “bad idea” to cut funding for scientific research on the environment and climate change; and 74 percent support requiring employers to offer paid parental and medical leave.

Because the word “socialism” has been demonized for so long, few Americans call themselves socialists, but that is beginning to change.

Because the word “socialism” has been demonized for so long, few Americans call themselves socialists, but that is beginning to change. Americans who came of age after the Cold War are more likely to associate socialism with Denmark or Sweden, not Russia or China.

Over the past decade, we’ve seen growing concern about the widening income and wealth gap, stagnating incomes, the persistence of gender and racial injustices, and threats to the environment and the public health. Efforts like Occupy Wall Street, Black Lives Matter, the Dreamers’ immigrant-rights movement, the battles against the Keystone pipeline and for marriage equality, the Fight for 15 and Justice for Janitors among low-wage workers, and the burgeoning #MeToo movement have triggered a new wave of activism.

But nothing has inspired more protest than Trump’s election. A Washington Postpoll, released in March, found that one in five Americans had protested in the streets or participated in political rallies since the beginning of 2016. Of those, 19 percent said they had never before joined a march or a political gathering. And many said that they plan to be more involved politically this year. About one-third said that they intend to volunteer or work for a 2018 congressional campaign. The overwhelming majority of respondents—70 percent—said they disapproved of Trump and his brand of crony capitalism.

All these forces have laid the groundwork for a resurgence of radicalism. Not since the Great Depression have so many Americans questioned the fundamental tenets of capitalism. As a result, the idea of socialism is gaining more traction, especially among young Americans like Ocasio-Cortez.

When Michael Harrington organized the Democratic Socialist Organizing Committee in the 1970s (which changed its name to DSA in the early 1980s), his goals were modest. He had abandoned the idea that a separate Socialist Party should run candidates for public office. Instead, he hoped to keep alive the moral values of democratic socialism as well as encourage activists in the labor, women’s, civil rights, and environmental movements that, working together as a coalition, could transform the Democratic Party into a more progressive force, more closely aligned with Europe’s social democratic parties. Harrington’s strategy has been taken up by  DSA members today, who work within the Democratic Party, trying to push the party, and the country, to the left.

Harrington, who died in 1989, never expected DSA to become a mass organization. Surely he would be pleased by DSA’s growing membership and the polls revealing Americans’ increasing openness to socialist ideas. He’d also be thrilled by the upsurge of progressive activism in the streets and within the Democratic Party.

As the wide support for Bernie Sanders revealed (and still reveals), there’s a great deal of pent-up demand for candidates who not only articulate Americans’ frustrations with the economic and political status quo but also outline prescriptions that would move the country in a more progressive direction. That’s what American socialists have been doing for over a century and what Ocasio-Cortez did last week.

(Peter Dreieris E.P. Clapp Distinguished Professor of Politics, and chair of the Urban & Environmental Policy Department, at Occidental College. He is an occasional contributor to CityWatch. His most recent book is The 100 Greatest Americans of the 20th Century: A Social Justice Hall of Fame(Nation Books, 2012). He writes regularly for the Los Angeles Times, Common Dreams, The Nation, and Huffington Post. This commentary was posted originally at American Prospect)