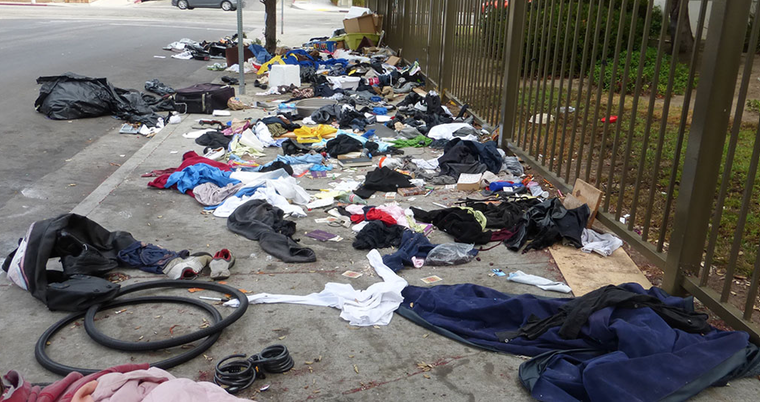 NEIGHBORHOOD POLITICS--To introduce myself, I am the owner of numerous small apartment buildings in the Venice area totaling some 86 units and also live in Venice and am very negatively impacted by the campers.

I constantly get calls from my residents complaining about human waste and needles in alleys and on parkways, smashed car windows, UPS packages stolen, bicycles stolen and finding unconscious persons in a pool of urine and vomit in the stairwell. The worst was an encampment under the crawl space of one of my buildings (109 Brooks Ave) where campers were lighting cooking fires and sleeping under one end of the building whilst defecating at the other end. It was disgusting.

The problem with Councilman Bonin and Mayor Garcetti is that they are saying these relatively small shelters will solve the problem. They are disappointed that neighbors are getting in the way when, in reality, the neighbors want to solve the problem but, in a way, and a place that actually works for the neighborhood and all the homeless not just a small percentage while the majority will still not have a place to sleep except the sidewalk

Bonin's statement that he is fixing the problem is entirely false. The proposed shelter at the abandoned bus depot will accommodate 150 homeless when there are estimated to be about 1,000 campers in the immediate Venice Beach area alone. What about the other 850 that will still be on the street, not to mention all the others who will come and camp around the shelter to get in line hoping for a free home and free meals. Nothing solved at all.

Garcetti and Bonin have no concept how to use money wisely. Clearly they are steering huge amounts of funds to their favorite organizations, possibly verging on corruption. The current FBI investigation into corruption within LA needs to extend to the use of prop HHH where over a billion dollars is going to disappear with little to show for it if Bonin gets his way.

In another Venice project Bonin wants to spend $500,000 per one-bedroom apartment for one occupant when there are private providers who are putting two people into an apartment for only $60,000 - corruption / waste - definitely?

REDLINING: There are no encampments in other parts of Bonin’s council district i.e. Brentwood, Westchester, Palms, Mar Vista or where he lives. The police would be right on it. It's untrue that there is nothing the police can do in Venice. They have been told by Bonin not to do their job and leave the situation as it is. This is discrimination of how law enforcement is applied based on neighborhood. The police should be enforcing the law evenly everywhere and not allowing themselves to be steered by a councilman.

Please read your own newspaper article which clearly reports what happens to the neighborhood when a homeless shelter is opened.

It's no good me complaining without coming up with a better idea - so here it is - LA city owns thousands of unused properties that could be sold for a huge amount of money (especially the bus depot and the Venice Bl median strip) that would pay for ample safe hygienic campgrounds (like KOA) with facilities and soup kitchen and counselling and rehab, away from residences and businesses so all homeless will have a legal place to camp - not just a few in overpriced apartments while the majority are still on our sidewalks.

Venice residents welcomed your recent article as it is balanced addressing both sides of the deplorable situation. Please write follow up articles reflecting more of the real dilemma as described above, including some investigative work into corruption/cronyism, waste, alternative solutions, etc. if you are to help the homeless and the Venice residents.

(Peter Nott is a Venice resident and housing provider.)

PS   Please read this plea for a change in policy which Bonin will not even respond to.

This letter is to stress the ongoing problem of homeless encampments along the boardwalk. The activity severely affects one of the few places in Los Angeles where working class families come to enjoy affordably with family and friends. It also affects our ability to enjoy business and operate effectively as small business owners who employ lower income residents.

The police have been notified numerous times and say there is nothing they can do. This is hard for us to believe that the homeless encampments along the busiest and most tourist attracting location in the largest city in the world has this terrible problem of large numbers of less fortunates, vagrants and drifters camping out on public property.

Some of them have businesses with illegal activity such as stolen bicycles operating right on Ocean Front Walk all day every day and all night. Sales of illegal drugs is also an ongoing problem. We have reports from business and restaurant owners whose clients are hassled for money and unable to enjoy the services provided. They leave piles of garbage in the streets every day. They are destroying the grassy areas that are part of the park where tourist and locals alike come to enjoy. Almost every grassy area has homeless encampments stationed there and leaves little room for families and visitors to come and enjoy. We are suffering already from lack of tourism and what little we do have is shunned away by the eye sores and unhealthy activity on going for some time now. Venice Beach is becoming a place where average persons have heard about and come to see, they show up, are begged to for money, drugs or cigarettes, made to feel guilty if they do not comply, see unhealthy activity, vulgarity, and unsanitary people and belongings all along the strip, they leave here and will never come back again. It is not a fun place to visit or work at any more.

We know there is a serious problem of large populations of homeless people in and around Los Angeles and we know the solution is not an easy one for anyone. We have compassion for these people and we want to help. The homesteaders along Venice Boardwalk are not your average “down on your luck homeless”, they are mostly either out of prisoned left in the streets with nowhere to go or bohemian drifters and runaways who are hooked on drugs and choose this lifestyle. many do have a place to go or capability of other means of existence but prefer the ease the Venice community for comfort, camaraderie and ease of obtaining food and restroom facility. It is fine for them but it is not fair to us businesses and residents who have strived some of us over half our lives to maintain the lifestyle we once enjoyed here in Venice. We do not see the same activity in surrounding areas such as Abbott Kinney, Santa Monica, Main Street, Rose Av. in Venice, Manhattan Beach and many other areas near beach cities where people come to enjoy free time.

But more importantly the ill vibe, uncleanliness and vulgarity destroys the fun environment of the visitors of all walks of life who come here to enjoy. Some who may not be able to afford Disney Land or Universal Studio. They come to Venice for the price of parking and lunch and are able to play, swim, watch free entertainment and shop at a world famous place that is within their budget.

The influx of homeless populating the boardwalk has drastically affected our businesses to the point we have signed a petition to beg for help from the city. We cannot continue to operate freely with this situation at hand. We have to pay rents and other expenses and make an effort to contribute jobs to the community and taxes to the city and state government.

It’s a changing and different world now with internet and social media. Tourist and families are scared and shy away from Venice Beach because of the problems of homeless, unsanitary environment, crime, drug use, etc. Many visitors and locals complain about the things that prevent Venice from the fun place it once was. We want to bring Venice back to the fun, zany, eclectic place

We are begging for your help to resolve the issue of homeless encampments along and near Ocean Front Walk.

Please see what can be done to end this problem

Thank you for your consideration,