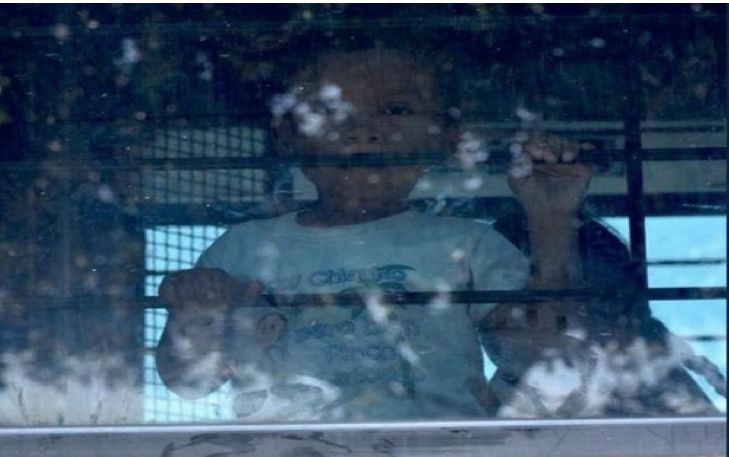 RESISTANCE WATCH--The kids are still waiting and the lies are still flying, abetted by Trump's willingness to exploit any grief or hardship in the name of perpetuating the lie that is his border "crisis" and obscene response to it.

Cue  Friday's tacky "Angel Parents" event, wherein he giddily paraded 11 families of those killed by "criminal illegal aliens" - mostly in car crashes - onto a stage emblazoned with “Protect Our Communities” and “Secure Our Borders” in order to "honor American victims of illegal immigration.”

He did so by autographing each of their large photographs of loved ones - yes, he autographed the pictures of their dead relatives - making jokes about how great the dead relatives looked - “This is Tom Selleck, except better looking!” - and repeating entirely bogus statistics to prove that immigrants = crime.

"These are the American citizens permanently separated from their loved ones,” he proclaimed. “These are the families the media ignores...Very unfair.”

Here's what's unfair. He is shattering, likely irreparably, thousands of children and families based on a series of lies that have been repeatedly and comprehensively debunked. The lies range from his preposterous claim at the event that 63,000 Americans have been killed by undocumented immigrants since 9/11 to his insistence that "rampant crime" accompanies immigrants despite mountains of evidence proving exactly the opposite - that immigrants, legal or not, commit crime at a dramatically lower rate than native born Americans. There are multiple studies showing this.

They are here, here, here, here, here, here. They represent facts, which matter. They call bullshit to the incessant fiction, robotically repeated Monday by Sarah "Still Hungry" Sanders, that this carnage is needed to stop the dangerous criminals, rapists and drug dealers - see front and below - currently languishing in kiddie prisons along the border. Keep calling them out. They're lying.

(Abby Zimet writes for Common Dreams … where this perspective was first posted.)