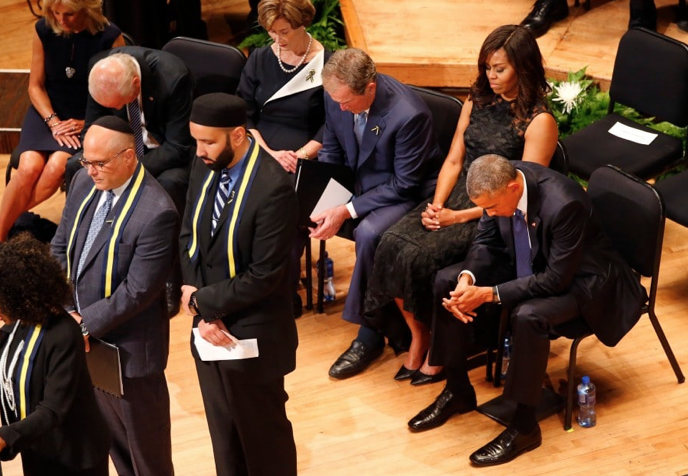 RESISTANCE WATCH: Half of Americans think the United States is in “real danger of becoming a nondemocratic, authoritarian country.”A majority, 55 percent, see democracy as “weak” — and 68 percent believe it is “getting weaker.”

Eight in 10 Americans say they are either “very” or “somewhat” concerned about the condition of democracy here. (Photo above:Barack and Michelle Obama, along with George and Laura Bush and Joe and Jill Biden, bow their heads in prayer during an interfaith memorial service in 2016 for five fallen police officers in Dallas.)

These are among the sobering results of a major bipartisan poll published Tuesday that was commissioned by the George W. Bush Institute, the University of Pennsylvania’s Biden Center and Freedom House, which tracks the vitality of democracies around the world. The three groups have partnered to create the Democracy Project, with the goal of monitoring the health of the American system.

“We hope this work can be a step toward restoring faith in democracy and democratic institutions,” Bush said in a statement.

The concern about the condition of democracy inside the United States transcends the tribal divide between Republicans and Democrats, with majorities across races, genders, age groups, levels of education and income brackets expressing fear. (Read the rest here.)