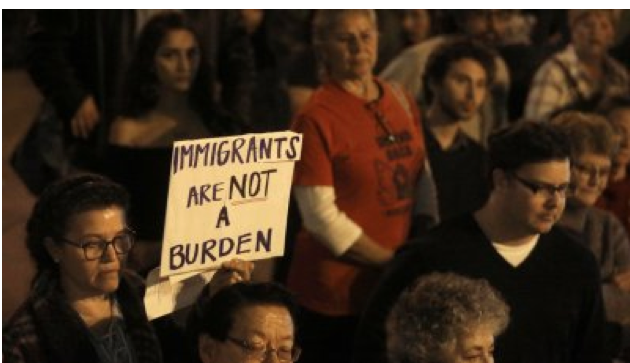 RESISTANCE WATCH--A California city voted late Tuesday in favor of a sanctuary-like resolution to bar local authorities from supporting federal immigration enforcement. The development marks a win for undocumented migrants amid an intensifying tug of war between Washington and local governments, particularly in blue states like California.

San Gabriel's City Council voted to enact what supporters billed as a "safe city" resolution by a vote of three to two. The resolution, which reflects similar measures enacted by other cities throughout the state and country since the start of Donald Trump's presidency, serves to not only reinforce at the municipal level the state's pre-existing commitments to bar California authorities from aiding federal immigration agents, but also to educate city staff in how best to respond to the needs of immigrants seeking support services like legal help.

"San Gabriel prides itself on its diversity and being a multi-cultural hub in the San Gabriel Valley. By passing the safe city resolution, the City of San Gabriel stands alongside a growing group of cities in California and the nation affirming their commitment to the immigrants who live, conduct business, work, and visit the city," said Marvin Andrade, the senior manager of coalition building at Asian Americans Advancing Justice–Los Angeles (AAAJ), a non-profit civil rights group. AAAJ worked in partnership with a host of other community organizations to help mobilize local stakeholders to offer public testimony in favor of the resolution.

Tuesday's city council meeting came weeks after a similar vote rescinded a controversial partnership between the city's police force and federal Immigration and Customs Enforcement. The San Gabriel Police Department's Chief Eugene Harris had signed a memorandum of understanding with the agency in December allowing his department to aid ICE agents. But in February, the city council heard public testimony for and against the memorandum and eventually voted to terminate it.

Proponents of the safe city resolution say it aims to boost community security, precisely by blocking any future partnerships between local police and immigration agents. "It intends to aid local law enforcement by encouraging undocumented immigrants to come forward with relevant information about crimes without fear of deportation," Andrade said.

And the benefits will be much more far-reaching than law enforcement, he said; the resolution also aims to "promote a vibrant and diverse local economy by promoting the city as immigrant friendly."

Prior to the vote on Tuesday evening, AAAJ, together with other community organizers, rallied local stakeholders to offer testimony in favor of the resolution. Community members offered impassioned arguments for and against the resolution for more than three hours.

Before the vote, City Councilwoman Juli Costanzo—who supported the now-defunct San Gabriel police-ICE partnership on the grounds that it "provided us resources that we as a small department would not have access to"—underlined the importance of public testimony. "Although I might be leaning toward a certain direction, I always value the comments heard from the San Gabriel community during 'public comment,'" she said. "I am often enlightened by a certain perspective that I hadn't thought about."

Costanzo voted against the resolution Tuesday. Other council members did not respond to or declined Pacific Standard's interview requests.

The City of San Gabriel is of particular importance to observers of immigrant rights under the Trump administration because it is located in the eponymous San Gabriel Valley, which has been dubbed by community analysts as the "Capital of Asian America"—the region with the largest per capita Asian-American population in the country. Many of the San Gabriel Valley's residents are new immigrants, and a large number of those—about 58,000, according to recent findings—are themselves undocumented.

The City of San Gabriel is among the municipalities most affected by the Trump administration's immigration policies not only because of its demographics, but because of its location in California, a state at the heart of an ongoing, highly publicized battle between Washington, Sacramento, and other local California officials.

Earlier this month, the Department of Justice filed suit against California to block its sanctuary laws. The Trump administration has made clear that it will target local governments that actively contravene its immigration policy. Last month, Attorney General Jeff Sessions publicly scolded Oakland, California, Mayor Libby Schaaf for sending a tweet warning her community's undocumented residents of impending immigration raids. It remained unclear whether the Department of Justice would press charges against Schaaf.

In one instance also in response to California's sanctuary laws, the president declared that he was mulling removing ICE from California altogether, in an attempt to generate what he described as crime and chaos there.

What happens in San Gabriel may serve as an indicator for broader trends—in this case, not only of Asian Americans or other immigrant enclaves, but how the local administrations governing immigrant communities are reacting to both the president's controversial immigration policy and threats of reprisal for refusal to support it.

(Massoud Hayoun writes for Pacific Standard where this piece originated.)