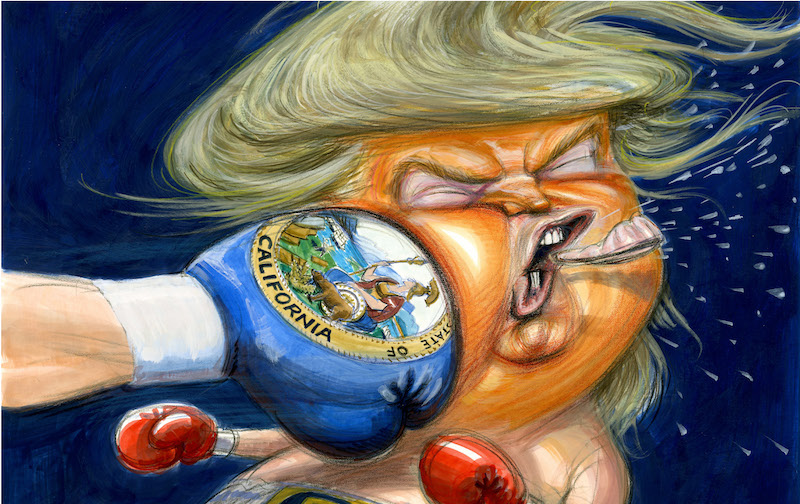 BCK FILE-Trump values loyalty above all else. It’s likely behind the prominence of his family in or around the Oval Office, as well as longtime associates who are ill-suited for their positions. So, when Californians didn’t vote for him in the general election, he came back swinging.

He didn’t always have this animus toward our state. According to a Washington Post article, the future president spent much of the summer of 2006 in the bungalows of the Beverly Hills Hotel. His Apprentice franchise had been relocated to the west coast as Melania stayed in New York with the couple’s newborn Barron.

Karen McDougal told the New Yorker that she began an affair with Trump in a Beverly Hills hotel bungalow and Summer Zervos filed a lawsuit, alleging that Trump groped and kissed her in the same location.

The future president first encountered Stormy Daniels during a celebrity golf tournament in Lake Tahoe. Around 2008, he purchased side by side houses on Rodeo Drive, steps from the hotel. He sold one of the houses a year later, taking an over $800,000 loss.

Since assuming office, Trump has had a rather tempestuous relationship with the state of California -- and one issue is at the nucleus of this maelstrom.

Immigration was a key part of Trump’s campaign promises. At the core was a $3 billion wall that riled up his base, for which he assured all that Mexico would foot the bill. Trump’s candidacy and now many of his haphazard minimalist policies, hinge on the jingoistic nationalistic fervor he has incited among his supporters.

In September, CA Attorney General Xavier Becerra filed a suit against the Trump administration, based on the belief ending the Deferred Action for Childhood Arrivals (DACA) would negatively impact the state’s economy.

Now, AG Jeff Sessions has fired a missile at the state, suing California for what he says is not doing its share to find and punish undocumented immigrants. “California is using every power it has -- and some it doesn’t -- to frustrate federal law enforcement. So, you can be sure I’m going to use every power I have to stop them,” Sessions said in Sacramento.

Sessions is relying part of his case on Arizona v United States, a 2012 SCOTUS ruling in favor of the Obama administration, which had sued Arizona for its violation of federal immigration laws. Arizona SB 1070 required law enforcement officers to demand papers of suspected immigrants who could face misdemeanor charges, as well as other measures intended to seek out and punish undocumented immigrants.

The suit filed by Sessions is likely to reach the Supreme Court, which is expected to reach a landmark decision about the role of states versus federal government in immigration policy. Interestingly, Sessions, as a conservative, has turned back on his lifelong support for states’ rights, stating that immigration is under the domain of the federal government.

We’ll continue to follow what will likely be continuing confrontations between Trump and California. Stay tuned.

(Beth Cone Kramer is a professional writer living in the Los Angeles area. She covers Resistance Watch and other major issues for CityWatch.)Edited for CityWatch by Linda Abrams.