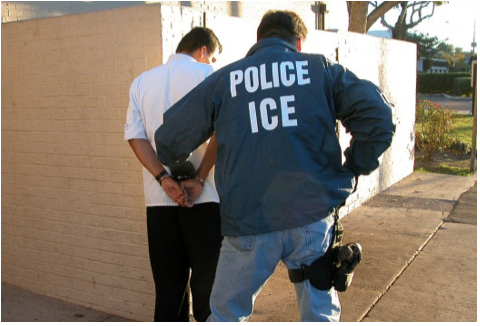 RESISTANCE WATCH-In a meeting about school safety and guns, President Donald Trump pivoted to some favorite targets: California and immigration. He said he might remove immigration and border officers from the Golden State and predicted that the result would be “a crime mess like you’ve never seen,” CNN and other news outlets reported today.

He mentioned gangs as a problem that the federal government was trying to address, with “no help from the state of California,” where one foreign gang establishes “franchises.”

“They’re doing a lousy management job, they have the highest taxes in the nation and they don’t know what’s happening out there,” Trump said.

Trump made his remarks in a session with state and local officials who had dealt with shootings at schools. He did not explain how he believed gangs and school shootings were related.

He went on to say, “the sanctuary city situation, the protection of these horrible criminals …. If we ever pulled our ICE out and said, ‘Hey, let California alone and let them figure it out themselves,’ in two months they’d be begging for us to come back.”

“I’m thinking about doing it,” he said, without offering details about a specific plan.

California Attorney General Xavier Becerra, who has filed more than two dozen lawsuits against the Trump administration on a range of issues, said the state works “in concert with federal laws” and defended its pursuit of those who commit crimes.

“We’re going after drug dealers, sex traffickers. We don’t stop doing that. My division of law enforcement is doing that right now,” Becerra said in a statement. “What we won’t do is change from being focused in public safety – we’re in the business of public safety, not deportation.”

As recently as January, the acting director of Immigration and Customs Enforcement, Thomas Homan, said California should prepare for an onslaught of ICE actions, such as raids and business audits. That statement came days after California’s “sanctuary state” law went into effect, limiting state and local law enforcers’ cooperation with federal authorities in certain circumstances.

(Elizabeth Aguilera, Health and Welfare Reporter, is an award winning multi-media journalist who will cover health and social services for CALmatters, where this was first posted.) Prepped for CityWatch by Linda Abrams.