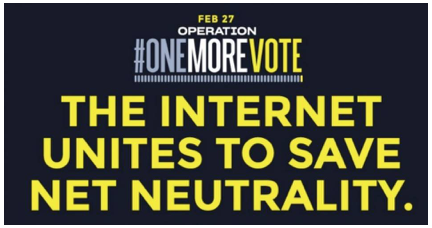 RESISTANCE WATCH--Federal Communications Commission (FCC) chair Ajit Pai's net neutrality repeal plan was finally published in the Federal Register on Thursday, but that doesn't mean net neutrality is officially dead—in fact, as open internet defenders quickly observed in response to the news, the fight to save the web from the Republican-controlled FCC is just beginning.

"Now it's officially go time, and the internet is gearing up for a hell of a fight."
—Evan Greer, Fight for the Future

"Now it's officially go time, and the internet is gearing up for a hell of a fight," Evan Greer, campaign director of Fight for the Future, said in a statement on Thursday. "The CRA is the clearest path to restore net neutrality protections that never should have been taken away in the first place. A vote is imminent, and every senator needs to decide right now whether they're going to listen to their constituents or go down in history as having voted against the free and open internet."

Opponents of Pai's net neutrality repeal plan—which was approved in a party-line vote by the Republican-controlled FCC in December—will now also have 10 days to file lawsuits challenging the new rule.

"This misguided decision awoke a sleeping giant—the American public—and we won't stop making a ruckus until internet openness is the law of the land."
—Jessica Rosenworcel, Democratic FCC commissioner

"An open internet is absolutely essential to a functioning democracy, and we will fight to make sure that the people, not the special interests and their compliant FCC, have the final word on its future," said Michael Copps, special adviser at Common Cause, one of the groups that is preparing to sue the FCC. "Common Cause and its allies are fighting all the way to oppose the FCC's misguided actions and restore the net neutrality rules through all fronts, including litigation."

In addition to prepping for legal battles, advocacy groups are also gearing up for a massive internet-wide protest set to take place next Tuesday.

Titled "Operation #OneMoreVote," the demonstration is aimed at harnessing widespread public support for net neutrality and translating it into pressure on lawmakers who have yet to back Markey's CRA.

"Internet users will be encouraged to sound the alarm on social media and sign up to receive alerts with their lawmaker's position on net neutrality and prompts to take action on the big day, while websites, subreddits, and online communities will display prominent alerts driving phone calls, emails, and tweets to senators and representatives calling on them to pass the CRA," Fight for the Future noted in a Medium post on Wednesday.

"Several senators have indicated that they are considering becoming the 51st vote we need to win, but they're under huge pressure from telecom lobbyists," the group added. "Only a massive burst of energy from the Internet will get them to move."

If the CRA passes the Senate, it will then face an uphill battle in the House, where it will need 218 votes to make it to President Donald Trump's desk.

(Jake Johnson writes for Common Dreams … where this report originated.)