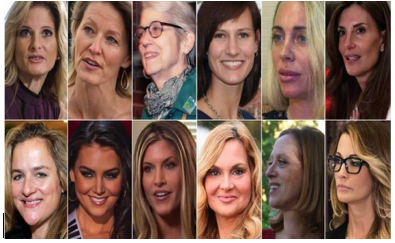 RESISTANCE WATCH--Amid renewed concerns about President Donald Trump's tendency to support men accused of abuse or sexual misconduct instead of their female victims—following his controversial remarks and notably delayed condemnation of domestic violence after two staffers recently resigned in response to allegations of spousal abuse—some Democratic lawmakers are calling for congressional hearings to give a platform to the more than a dozen women who have accused the president of sexual harassment and assault.

"He just has a disturbing lack of appreciation for the seriousness of these cases, and a predilection to always believing the accused instead of these victims."
—Rep. Kathleen Rice

"I think it would be most appropriate," Rep. Steve Cohen (D-Tenn.), one of the lawmakers leading the effort to impeach the president, told The Hill. "This is the most unusual circumstance that you have a president with over a dozen accusers of sexual harassment occupying the most prestigious position in the country."

Pointing to one of Trump's tweets following a fatal mass shooting in Florida last week, Cohen said "the president basically called for" launching an investigation into the sexual misconduct allegations women have levied against him.

"He said when the public sees bad and erratic behavior, or actions by somebody that's mentally disturbed, they should report it," Cohen noted. "Congress has that same responsibility."

In December, some of the women who have accused Trump of sexual harassment and assault united for a press conference in New York City to share "their firsthand accounts of President Trump groping, fondling, forcibly kissing, humiliating, and harassing women," and to demand a congressional investigation into their claims.

While emphasizing that "it's going to be up to each individual woman who's had an incident with Donald Trump to decide how public they want to be now about it," Rep. Kathleen Rice (D-N.Y.) also said she would support enabling these women to share their stories on Capitol Hill and denounced the president's long history of dismissing allegations of sexual misconduct and abuse.

"He just has a disturbing lack of appreciation for the seriousness of these cases, and a predilection to always believing the accused instead of these victims," Rice said. "It's probably hard for him to condemn other people who engage in behavior that's similar to his own—I understand the potential hypocrisy there—but when you're the president, you're supposed to make people feel like you care about their issues."

After the president provoked outrage earlier this month with a tweet in which he questioned the right of survivors to speak out, decried false allegations, and demanded "due process" for alleged abusers—which critics called "the most obvious demand that survivors, that women, just never speak"—Gillibrand fired back with a call for an investigation by federal lawmakers:

Recognizing President's Day on Monday, the women's advocacy group UltraViolet urged Americans to acknowledge the existing allegations against the president and continue to demand a congressional investigation.