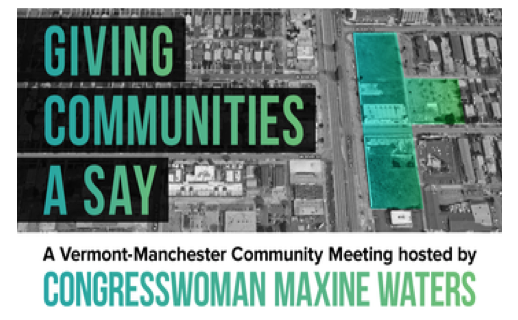 The embattled Vermont Entertainment Village developer made a strong case Saturday at a forum hosted by U.S. Cong. Maxine Waters that South LA residents should demand that the Los Angeles County Board of Supervisors drop its ill-advised effort to block the private developer’s $250 million project that includes retail services the community has been demanding for years, such as sit-down restaurants, a grocery store and a pharmacy.

“I believe if the residents, the community, the voters of South LA unite behind our transformative project they can convince the Board of Supervisors to drop its attempt to block it,” said Jennifer Duenas, Chief Operating Officer of Sassony Commercial Development Co., the Village developer.

On Dec. 5, 2017, the Board, led by Supervisor Mark Ridley-Thomas, voted to seize ownership of the Village project’s vacant five-acre property at the northeast corner of Vermont and Manchester, in a legally questionable use of the county’s power of eminent domain. The county’s alternative plan includes developing a 180-unit affordable rental housing project on the same site.

In mid-April, Los Angeles County plans to ask a judge to give it “immediate possession” of the Village site. Sassony has vowed to fight the proposed seizure of its property as illegal. In order for a seizure to be lawful, the government must show that the “taking” is necessary in order to provide a bona fide “public use” and that the owner receives a fair price.

It makes no sense for the Board to be “stopping a $250 million investment in South Los Angeles,” Duenas told the forum crowd. “We’re not saying that [the county’s rental housing project] is not needed. But why stop a project [the Village project] that’s ready to go to put this other one in?....Why can’t we do both. Why not work together to redevelop South LA as a whole.”

A complaint of several speakers at Saturday’s forum was that Ridley-Thomas, who represents South LA, did not seek community input before announcing his plan to stop the Village project and replace it with his personal development plan. More than a few critics of the county’s move have called it a “sneak attack” on the community.

Rep. Waters echoed those concerns. She said she was hosting the forum largely “because the neighborhood groups, the residents were not sufficiently involved or notified” about Ridley-Thomas’ plans for the Village site. Waters told the crowd she invited both sides in the controversy, Sassony and county officials, including Ridley-Thomas, to the forum. “They [meaning the county] chose not to come.” Ridley-Thomas did submit a 3-page letter about his views.

During her own remarks, Waters repeatedly challenged neighborhood and block club leaders to be as forceful as West LA and Beverly Hills residents are about demanding that major developers make their projects acceptable to them.

“This is about information today and real empowerment,” Waters said of her goals for the forum.

Village project representatives said their development would house a major grocery store, pharmacy, multiple sit-down restaurants, a banquet hall-community room and provide the kind of amenities found at destination shopping venues like The Grove in West LA or the Santa Monica Promenade, including outdoor dining, a performance stage for musical and theatrical presentations and multiple giant TV screens in a landscaped village square.

“No corners are being cut so we can give you the best possible project,” Duenas told the audience.

Sassony president Eli Sasson, who attended the forum, said the genius of his project is that it will provide the kind of shopping and dining experiences that are now non-existent in South LA. “The people want retail,” Sasson said later, “and this project will be the catalyst to attract more developers to invest into South LA.”

“Originally, I proposed developing a mix of retail and housing and the city of Los Angeles and Mark Ridley-Thomas himself, when he was a city councilman, said they didn’t want more housing,” Sasson continued. “They wanted retail. So I give it to them and now they want to build housing – it’s crazy.”

Former LA councilwoman Jan Perry, now Mayor Eric Garcetti’s top workforce and development adviser, spoke to the crowd, indicating the Garcetti administration was caught off guard by the county’s decision to use eminent domain to seize the Sassony property.

Sassony representatives also pushed back against Ridley-Thomas’ complaint that a county take-over of the property was needed because Sassony “has had multiple opportunities to develop the site” but has failed to do so for 25 years, leaving the site vacant. “Local residents have been let down, time and time again,” Ridley-Thomas wrote in his letter, explaining his position to the forum attendees. “It is shameful how long this has been allowed to continue.”

Sassony has faced many obstacles over the years, including Duenas clarified that Sassony did not always have control of the 2-city block site. n 2008 the city’s Community Redevelopment Agency (CRA) attempted to seize its property. That effort – also vigorously opposed by the developer – eventually failed. But for nearly five years, the CRA or the city “owned the land, we didn’t” because the property was tied up by the CRA’s eminent domain proceeding, Duenas said. She continued “during those years why didn’t the CRA/LA build their project?”

In May 2013, the first eminent domain cloud was lifted. However, three additional parcels of land to expand the project site were still owned by the s agency that inherited the CRA’s real estate portfolio after the CRA was abolished. Duenas explained that it wasn’t until Nov. 15, 2017 that Sassony finally closed escrow and purchased the three outstanding parcels. Those parcels, Duenas said, were needed to deliver all the needs of the community and especially a fresh produce grocery store.

By Nov. 15 Sassony had 100 percent site control and significant zoning and land-use entitlements from the city, Duenas said. It had passed its environmental review; and its building plans had been submitted. The company was saying “Oh, great, we’re finally going to build and then the county tells us they want to take over our land!” Duenas told the audience.

“No one should doubt for a minute our commitment to this community and this project,” Duenas said later. “We have fought tooth and nail to give South LA a great project and we’re not going to drop our commitment now. What we need is for the community to make its voice heard, loud and clear, in opposition to the county’s illegal takeover plan.

“If the community stands up, and makes its wishes known, we believe the Board of Supervisors should drop what they’re doing,” Duenas continued. “That will save the taxpayers a lot of legal fees, spare this community more delays in construction of this project and allow us to go forward with a project that all of us will be proud of and that will be a huge asset for South LA.”

(John Schwada, whose consulting firm, MediaFix Associates, represents Sassony Commercial Development Co., is an occasional contributor to CityWatch. He is a former investigative reporter for Fox 11 in Los Angeles, the LA Times and the late Herald Examiner.) Prepped for CityWatch by Linda Abrams.