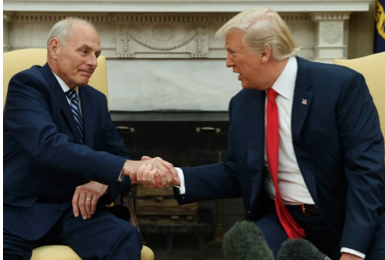 RESISTANCE WATCH--In the maelstrom that has been the Trump’s road to the Oval Office, yet another accused domestic abuser has been uncovered in the inner circle. President Trump’s White Staff Secretary Rob Porter tendered his resignation after the details of abuse allegations by two ex-wives and a photo of his bruised first wife were exposed in the Daily Mirror and on The Intercept site.

Domestic violence seems to be a badge of honor in the Trump camp that has included a cadre of men with allegations and some, restraining orders. During the election cycle, campaign manager Corey Lewandowski was charged with battery after shoving a reporter at a campaign rally. The charges were dropped. Former chief strategist Steve Bannon was charged with three misdemeanor counts of domestic violence back in 1996. (Although those charges were dropped when his wife did not appear at the trial, she told the police the two had engaged in 3 to 4 arguments that had turned into physical altercations.)

Last February, Andy Puzder, former head of Carl’s Jr., withdrew his name from consideration for Labor Secretary after earlier domestic violence allegations surfaced. As a candidate, most of us believed Trump was finished when the Access Hollywood tapes revealed the candidate bragging about grabbing women’s crotches because he “can.”

Trump’s first wife Ivana backpedaled on details of abuse and rape after he raged against her following painful scalp reduction surgery. She told the writer that she had used the term “rape”” during a divorce deposition but “did not want those words to be interpreted in a literal or criminal sense.”

Certainly, all of these allegations and details are deeply disturbing. But for anyone who has experienced abuse, it’s the denials and gaslighting that are at least as upsetting.

Porter and the Trump communications office have been scurrying to take the wind out of the Porter allegations. White House Communications Director Hope Hick was reportedly calling urgently around the Capitol to find character affadavits for her reported  boyfriend.

It’s incredibly discouraging to see such a vile attack on such a decent man. Shame on any publication that would print this — and shame on the politically motivated, morally bankrupt character assassins that would attempt to sully a man’s good name.

I know Rob. I’ve known him for years, both as a close friend and as a personal adviser. He is kind and considerate towards all. The country needs more honest, principled people like Rob Porter, which is why I hope that this cynical campaign to discredit his character ultimately fails.

A Hatch aide later tried to pull back the quote, citing that Hatch hadn’t known the details but had been advised of a smear campaign to discredit Porter. Though the senator then issued a more appropriate statement, he reiterated that he had advised Porter not to resign but to “keep a stiff upper lip and to work through his problems.”

Porter himself denied the allegations, writing, “These outrageous allegations are simply false. I took the photos given to the media nearly 15 years ago and the reality behind them is nowhere close to what is being described.I have been transparent and truthful about these vile claims, but I will not further engage publicly with a coordinated smear campaign.”

Chief of Staff General John Kelly initially defended Porter as a “man of true integrity and honor and I can’t say enough good things about him. He’s a friend, a confidante and a trusted professional.”

Each and every one of these glowing recommendations is a trigger for anyone who has been the target of abuse, whether punches or raging words were thrown. At the core of any abuse is denial or gaslighting, discounting the victim’s reality, and most victims will share that this reverse reality is the most painful part of abuse.

The Trump administration and Gen. Kelly were undoubtedly aware of the allegations against Porter; these charges were serious enough to derail his security clearance and his ex-wives say they had been interviewed by the FBI in January.

The free pass of abuse until caught is just another form of gaslighting. Whether the Trump administration stakeholders found it incredulous that a Harvard-educated “nice guy” could terrorize and assault his wives behind doors or the parties involved see loyalty to Trump as more important than spousal abuse -- until a photo surfaces  -- doesn’t much matter.

This egregious scrambling to provide cover for an abuser is inexcusable. There are no “alternative facts.”