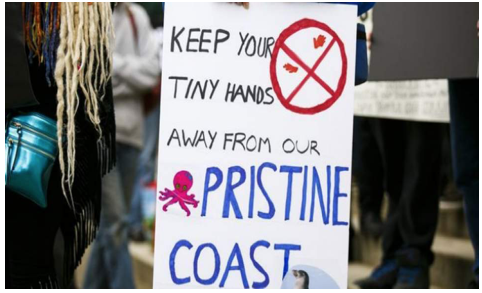 RESISTANCE WATCH--West coasts environmentalists and indigenous people have launched a series of protests to challenge the Trump administration's controversial proposal to dramatically expand offshore oil drilling, which would threaten communities all along the U.S. coastline.

"We have to step up and let these people know we want to keep our coastline clean and pure as it should be," said Elke Littleleaf, a member of the Warm Springs Indian tribe who participated in a protest at the Oregon State Capitol in Salem on Tuesday.

Hundreds of critics of the Interior Department's plan—including some who sported black t-shirts that declared "drilling is killing"—gathered outside the state Capitol on Tuesday in response to a public meeting about the proposal, which was hosted at a nearby hotel by the department's Bureau of Ocean Energy Management.

Oregon's protest came on the heels of more than a thousand people in California, including local politicians, rallying in opposition to the drilling proposal over the weekend.

Environmental and indigenous groups in California have planned another demonstration that will take place in the state's capital, Sacramento, on Thursday.

In an op-ed outlining how "the Trump administration's effort to dramatically expand federal offshore oil production has reignited a battle with California that dates back nearly 50 years," Charles Lester, the former executive director of the state's Coastal Commission, notes that the proposal has not only "sparked tremendous opposition in California," but "nearly all other coastal states also are objecting."

Urging Californians to support renewable energy sources "such as wind and wave energy," as well as a state bill that was introduced in response to the Trump drilling proposal, Lester concludes, "Such actions would be symbolically important now, and could help California make headway towards what many protesters here are calling for: a permanent ban on offshore oil development."